Another incredible trip ahead, and this time it's to southern Peru with my friends Simon, Howard, and Malcolm from the United Kingdom, and our trusty guides from Manu Expeditions. My travels began on November 20, but were largely uneventful as I spent much of that day in a plane, first from Victoria, BC to Seattle, WA, then onto Los Angeles, CA, and finally the red-eye to Lima, Peru where I arrived at 10:45am the next day. Not to be outdone by travel fatigue, my first bird out of the airport was Black Vulture, and rather unenthusiastically followed by Rock Pigeon.

Manu Expeditions arranged for my transport, which went very smoothly as I met my driver holding a sign with my name on it...now I feel like a celebrity; oh, wait, everyone else gets a sign too! I arrived at the hotel, Hotel Senorial, at 12:45pm, but my travel companions were not arriving until much later. After settling in I took a short five minute walk to the nearby cliffs overlooking the ocean. Much of the area was heavily developed, but the view out over the ocean was incredible and the largely undisturbed cliff face supported a few birds. My first lifer for the trip was West Peruvian Dove, which was actually quite common and an easy bird to photograph at the hotel. 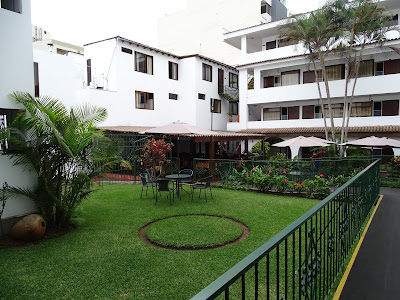 Scattered along the edge of the cliff I also picked up Eared Dove, Bananaquit, Long-tailed Mockingbird, and Scrub Blackbird. Better birds however were spotted over the ocean, as I picked up three lifers through the scope: Peruvian Pelican, Inca Tern, and Belcher's Gull. Feeling rather comfortable scanning for birds, I was disappointed when a security guard came by and told me to leave, and that there was a high risk of being robbed mid-day being so conspicuous with my binoculars and spotting scope. So, with tail between my legs, I retreated back to the hotel for an early dinner, a shower, and some much needed sleep. I set my alarm for 5:00am, as we had all previously agreed to meet in the lobby at 5:30 am, to commence our 14-day trip with a morning pelagic voyage. 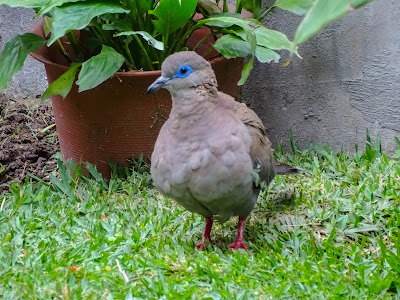 At 5:00am I was up, and at 5:05am my phone was ringing. Barry Walker of Manu Expeditions was on the line, telling me that everyone was ready to go...panic set in. Did I get the time wrong? No time to think about that...I sprinted to get ready, and 15 minutes later I was at the van. Turned out that the group changed the meeting time the night before, and my telepathy skills were not functioning. Regardless, we were soon on our way to the dock, which we departed from at 6:05am.

At the dock there were a good variety of birds, including Spotted Sandpiper, Ruddy Turnstone, Surfbird, Black-crowned Night-Heron, and my first two lifers for the day, Blackish Oystercatcher and Gray-headed Gull. There was also an incredible number of Franklin's Gull's...more than 10,000 by my estimation. As we slowly made our way from land we started picking up other target species, the first of which was Kelp Gull, followed by Red-legged Cormorant and Guanay Cormorant, each of which were lifers. We then spotted a Humboldt Penguin swimming not too far from the boat...another lifer and my first penguin ever! For the next couple hours we had relatively low numbers of seabirds, but those that we did get were all good. We had especially good looks of some species as we 'chummed' for tube-nosers. The list included Sooty Shearwater, Elliot's Storm-Petrel (lifer), Peruvian Diving-Petrel (lifer), Pink-footed Shearwater, Pomarine Jaeger (skua for those of European descent), Swallow-tailed Gull (lifer), Waved Albatross (lifer), Ringed Storm-Petrel (lifer), White-chinned Petrel (lifer), Black Strom-Petrel, Markham's Storm-Petrel (lifer), and Wedge-rumped Storm-Petrel (lifer). 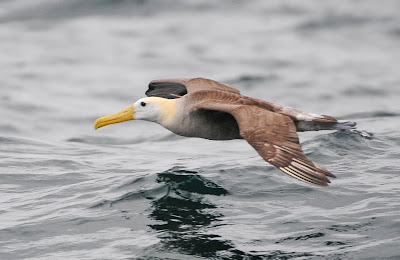 Following our 'chumming' session we started to make our way back to land, but in the direction of Isla San Lorenzo. Along the way we picked Chilean Skua (lifer) and Red-billed Tropicbird (lifer), the latter which was even a new species for Barry's Peru list! A rare bird indeed, and we think we have a strong El Nino event to thank for it. Closer to the island we picked up South American Tern, which was yet another lifer. Once at Isla San Lorenzo, our primary target species was Surf Cinclodes, which we managed to pick up relatively quickly. The bird was so well camouflaged however that on a first pass some of us missed the bird and we had to slowly back-track for everyone to get a good look. The island itself was laden with Inca Terns, Peruvian Booby's, the odd Blue-footed Booby, several Humboldt Penguin, and a few Peruvian Pelicans, Kelp Gulls, Belcher's Gulls, and Guanay and Red-legged Cormorants. There were also several hundred South American Sea-Lions. 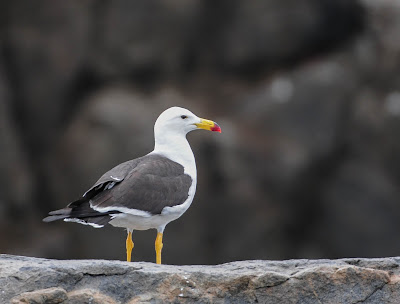 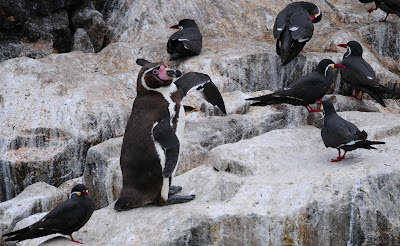 After leaving Isla San Lorenzo we made a bee-line back to dock, which we arrived at shortly after 1:00pm. We then boarded our ground transport and headed through Lima, and then south toward Nazca. We didn't have a great deal of time to stop and look for birds, as the drive to Nazca was quite long. However, we did stop briefly at a couple of wetlands to add three lifers: Great Grebe, Chilean Flamingo, and Puna Ibis. Just prior to arriving in Nazca, as the sun was setting, my last bird of the day was a Lesser Nighthawk. At our hacienda, located on an old farmstead, we enjoyed a quite candlelit dinner before hitting the hay early.

Today I woke at 5:00am, and instead of having breakfast first, we spent nearly two hours birding the local grounds around the hacienda. There was quite a lot activity, and we quickly added common species such as West Peruvian Dove, House Wren, and Cinereous Conebill. My first lifer of the day was Slender-billed Finch, a target species for us in this area and the only location we were likely to find it. I then added several other lifers, including Oasis Hummingbird, Collared Warbling-Finch, Peruvian Sheartail, Drab Seedeater (it truly was drab!), Andean Swift, Short-tailed Field-Tyrant, Chestnut-throated Seedeater, and Parrot-billed Seedeater. Some other good pre-breakfast birds included Burrowing Owl, Peruvian Meadowlark, and White-crested Elaenia. At 7:15am we had breakfast, and by 8:30am we were again on the road.

Our journey today was a long one, through much of what could be described as a moonscape. Much of the western slope of central Peru is in a rain shadow and subsequently devoid of vegetation. Or at least it seemed that way. Scattered grasses were present, and occasionally some shrubs grew in small valleys and canyons where whatever water did fall presumably accumulated enough to support plant growth. Our first target species was Cactus Canestero, which we picked up relatively quickly with the use of call-playback. We also added two other good species at the same location: Pied-crested Tit-Tyrant and Streaked Tit-Spinetail. Further along the long and winding road we stopped at another canyon where we added Thick-billed Miner (lifer) and Andean Condor. 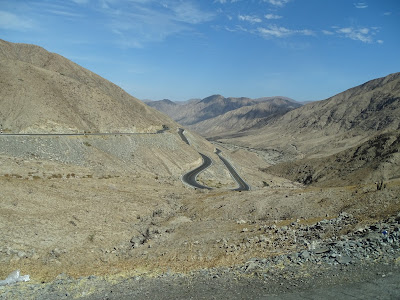 A long and winding road through the Peruvian moonscape

For lunch we stopped at a very high-elevation location, above 4,500m. However, before we started lunch we first searched for some high elevation species. Within minutes I was able to add three lifers: Streak-breasted Canestero, Gray-breasted Seedsnipe, and Creamy-breasted Canestero. We also saw two cool mammals at this location, Vicura (related to Llamas) and Mountain Vizcacha (a rabbit-like mammal that lives among rock outcrops), and shortly after leaving we watched an Aplomado Falcon chase, catch, and consume an Ash-breasted Sierra-Finch. 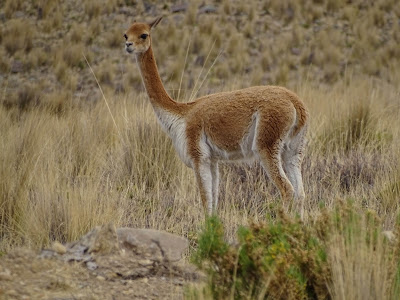 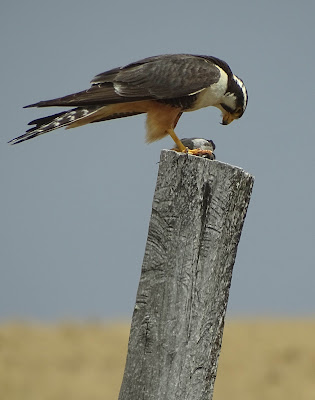 Now that we were "at height" and starting to gradually descend the eastern slope of the Andes, the increasing prevalence of vegetation was a good indicator that birding was about to get better. We spent the afternoon traversing the high Andes plain, which was dotted with wetlands, small homesteads, and patchy vegetation. At one roadside pullout we added Andean Goose, Bright-rumped Yellow-Finch, Cream-winged Cinclodes, and Mourning Sierra-Finch. A bit further along, and at around 3:30pm, we added Yellow-billed Teal (lifer), Andean Coot, Andean Duck, White-cheeked Pintail (lifer), Striated Heron, Silvery Grebe, White-tufted Grebe (lifer) and Mountain Caracara (lifer). At another wetland, about an hour later, I added Giant Coot, Crested Duck, and Puna Teal. At this site it was particularly cold, windy, and lightly snowing! Not what I had envisioned for Peru, but I was after all in the Andes. 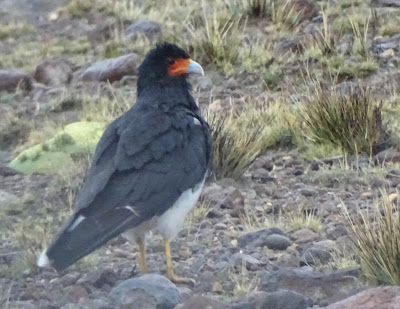 As the sun set we descended further down the mountains, arriving at our next hacienda, seemingly in the middle of nowhere, at about 7:00pm. After a quick clean-up we headed for drinks and dinner, followed by a wee-bit of owling that resulted in nothing. It had been a very long day of driving, but the birds were great.