The following is a summary of all species (in taxonomic order by day) that I saw in Colombia during a 7-day birding trip from February 22-28, 2017. A full list of species is provided for each day, as are key birding locations and general driving routes; those species that were lifers are underlined. The trip began and ended in Bogata, with key destinations being Parque La Florida, Laguna de Tabacal, Rio Blanco Reserve (guided), Los Nevados National Park, Las Tangaras Reserve (guided), Yellow-eared Parrot Reserve, and Otun-Quimbaya Reserve. This trip was more-or-less self-guided and was completed with birding friend Kent Russell. At certain reserves, it was not possible to go birding without a guide, as noted in the key areas above. From our respective home base cities, Kent and I travelled together from a common connection in Dallas, Texas. We arrived in Bogata after midnight on February 22, and by the time we got our luggage, picked up our rental car, and made it to the hotel, it was close to 2:00 am; our birding began just four hours later! All bird records are on file eBird

Highlights: Driving in Bogata was an extreme lesson in patience and good humour. Despite being exhausted from the late arrival to our hotel, we began our birding adventure at 6:00 am. Despite the early start, it unfortunately took nearly two hours to get to Parque La Florida, which cut severely into our allotted amount of birding time at this location. Upon arrival, we got a couple of targets quickly (Bare-faced Ibis and Noble Snipe), but Bogata Rail was a decided no-show despite getting a single bird to respond to playback. From the park, we headed back to the hotel to check out, and then made our way to Laguna de Tabacal. We didn't have much time to spend at this location, but we did add a good variety of species for the trip, particularly around the visitor centre. From the laguna we then made then long drive to Manizales; the drive was long and slow, but I did manage to add Laughing Falcon as a lifer during the drive.

Highlights: The trip to Rio Blanco Reserve requires a guide, which had arranged only a few days prior. A taxi picked us up at the hotel early, and liaised with our guide a few minutes later. We then travelled a short distance to the visitor centre where we commenced birding at sunrise...lots of hummingbirds at the feeders. After getting our bearings, the guide then walked us to several antpitta feeding stations over the course of the next three hours; lady luck was on our side as we successfully ticked four species. Other morning highlights included Flammulated Treehunter, Black-collared Jay, Golden-fronted Redstart, and Oleaginous Hemispingus. A nice lunch was provided at the visitor centre, after which we spent the afternoon walking downhill along the main road to the local reservoir. From here, the taxi picked us and took us back to the hotel where we had a nice dinner. 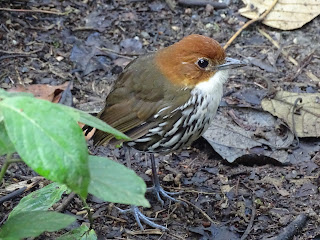 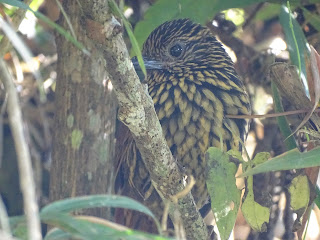 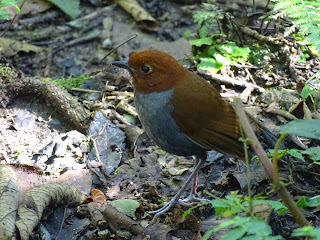 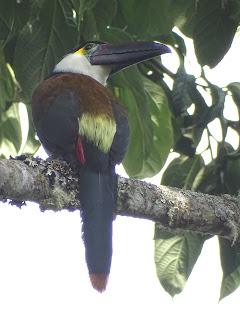 Highlights: Having spent a second night in Manizales, we rose early to venture to Los Nevados National Park; a high elevation park above 4,000 m. Our goal was to find Buffy Helmetcrest, which we had no trouble finding upon arrival at the main gate in dense fog and light drizzle. We also picked up Rufous-fronted Parakeet, and some good high elevation trip birds such as Tawny Antpitta, Stout-billed Cinclodes, Andean Tit-spinetail, and Viridian Metaltail. From Los Nevados we made the very long slow, winding, and arduous journey to Las Tangaras Lodge. Once again, this journey required a good measure of patience and good humour. After getting lost a little bit, and nearly running out of fuel, we arrived at Las Tangaras with enough light to do a wee bit of birding and tick Red-bellied Grackle. We had a nice meal at the lodge and hit the hay early. 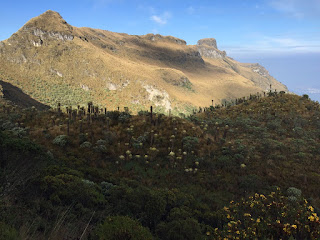 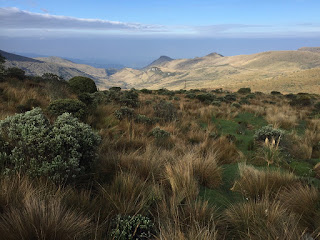 Highlights: Our focus today was to bird the upper reaches of the Las Tangaras Reserve, which was necessarily accompanied entirely by a guide. We spent almost the entire morning on the main trail above the lodge, and added several good species including Fulvous-dotted Treerunner, Tatama Tapaculo, Narino Tapaculo, Olivaceous Piha, Black Solitaire, Black-and-Gold Tanager, Gold-ringed Tanager, Black-chinned Mountain Tanager, and Purplish-mantled Tanager. During lunch, we spent some time birding around the main lodge, and following lunch we visited the hummingbird feeders (where we added Empress Brilliant and Velvet-purple Coronet) and birded the main road just beyond the main trail. We also popped back onto the main trail where we picked up one of my favourites for the trip, White-headed Wren. 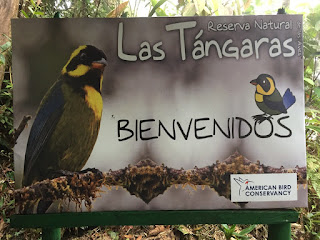 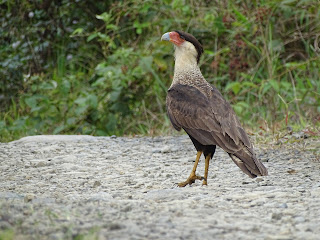 Highlights: We began birding the main road just beyond the main trail at 6:30 am. It wasn't particularly birdy, and so new additions for the trip were sparse. After lunch, we decided to try a new location across the valley, and so our guide led us to Las Aves Gorrion Andivia Reserve. This site is within cloud forest habitat, and true to its name was enshrouded by cloud making the birding difficult. We did however manage to get decent looks at Munchique Wood-Wren (a target bird here), Indigo Flowerpiercer, Slaty Brushfinch, and Cloud-forest Pygmy-Owl. We ended the day back at the lodge with a beer, good food, and a few laughs. 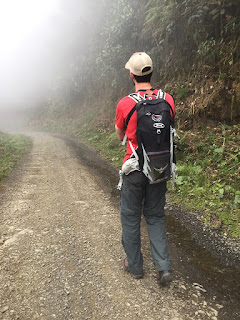 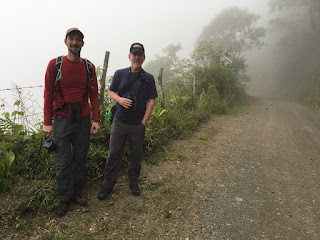 Birders in the Mist

Highlights: Another long drive today, but this time with a specific mission...the Yellow-eared Parrot Reserve. Having done a bit of homework on this site, we had the general impression that we would need to be there in the early morning, to catch a glimpse of birds moving from roost sites to feeding sites. From what we could gather, "early" was before 9:00 am. However, not unlike all of our previous driving routes, travel was slower, and rougher, than expected. Also, we had a couple of quick stops and turnarounds to pick up a few unexpected species such as Red-breasted Meadowlark, Crested Oropendola, Tourmaline Sunangel, Streak-throated Bush-Tyrant, and Wattled Guan. We arrived at the parrot reserve at 9:25 am, and after spending nearly an hour there and having seen no parrots, we were beginning to think we'd missed the opportunity. However, just a few minutes later I spotted a flock of parrots at a great distance and quickly got them in the scope. They were mere dots, and silhouetted against a light grey sky, and so we crossed our fingers hoping they would come closer...and they did. In fact, they came very close and we were able to get an excellent view of the birds as they flew past us...a view good enough to see the yellow ears. Shortly after, a few more birds passed by and in total we ended up seeing 21 birds. From the reserve, we made our way to Riosucio, and then to Pereira. We had intended to bird for a couple of hours in the late afternoon at Otun-Quimbaya, but a slowly-leaking tire upon arrival nixed that plan instantly and we had to back-track to town for a repair. 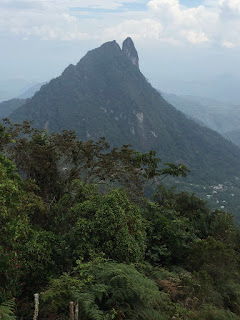 Highlights: Our final day of birding in Colombia, and so we rose early to hit Otun-Quimbaya at 6:25 am. We spent two hours birding the main road and got a few target species quickly, such as Red-ruffed Fruitcrow and Cauca Guan. Other birds were much less cooperative, although Kent did spy a Multicolored Tanager that I missed, and I spotted a Southern Emerald-Toucanet that Kent missed. We also had a screech-owl calling at an incredibly short distance (probably less than 10 m), but could not find it. We returned to the main parking area in hopes of birding the trails in that area, but we soon learned that a guide was required, and not available. Therefore, we decided to press on and slowly make our way back to Bogata...and slow was the operative word here, whether by choice or not. When we arrived in Bogata we were about 12 km from our hotel...we spent the next two hours travelling that distance as we literally inched along the congested and fume-filled streets interspersed with a thunderstorm. Once at the hotel, which in fact we were not staying at, we got cleaned up and had a nice, relaxing and celebratory meal before heading to the airport. Given our short planning time, and some driving challenges, we both agreed it was a very successful trip! 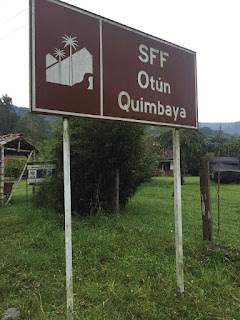 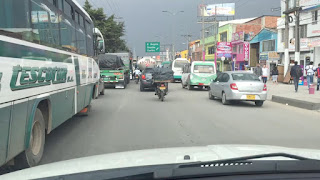 Trip Synopsis: Overall a very successful trip given that neither of us had been to the country before, and we only had two weeks to plan. Traffic was horrendous, especially in Bogata where it took more than two hours to get from the hotel (near the airport) to Parque La Florida (about 10 km away). It was also very bad crossing the Andes where there was an endless line of transport trucks and hairpin turns every few hundred metres. There were no major hiccups, but road tolls were more frequent than we had expected and it was wise to have carried a good amount of cash (about $150 USD) in small bills to keep things running smoothly. We got a flat tire in Periera, which was fixed in a local village in mere minutes for only $2 USD (we paid $5 USD because we were so thankful for the quick and friendly service). We would recommend a 4x4 vehicle with decent clearance if you plan to do the trip, and be prepared for some extremely rough roads, especially to get from Menazalis to Los Nevados National Park, Jardin to the Yellow-eared Parrot Reserve, and from Periera to Otun-Quimbaya. Driving within Las Tangaras Reserve was relatively easy, but slippery when wet.

Until next time. Happy Birding!
Posted by Michael Preston at 11:38 AM