I find myself saying the same thing every year on December 31st..."my how the year has flown by." And 2015 was no exception. Of particular personal interest in 2015 was following Noah Strycker's global big year, which seemed like only yesterday when he started.

Noah's finally tally, as his year ended several hours ago in India, was 6,042 species. This total far exceeds the previous record of 4,341 species by 1,701 species. For those who have been reading this blog, I hope you've enjoyed it. As a final post, to wrap up the year, I've added the four primary figures I've been using to illustrate Noah's annual progress, below. For anyone who thinks they're up for challenging Noah's record (and according to Noah's last post on Birding Without Borders, Day 365, there already is someone trying in 2016), perhaps the figures below can be used as a wee bit of insight for where potential improvements could be made. As I first posted when I started following Noah's trek, avoiding diminishing returns is paramount to success...don't spend too long in one area, and don't spend much time in areas with little return. For example, could Noah have improved his year-end tally by not birding in Antarctica, and instead visited another area that would have had higher returns in the long run? These sorts of questions may remain unanswered forever, but the stories of future record challengers, with the gained experience of their predecessors, will be a good indication. And let's not forget...a bit of luck can go along way. 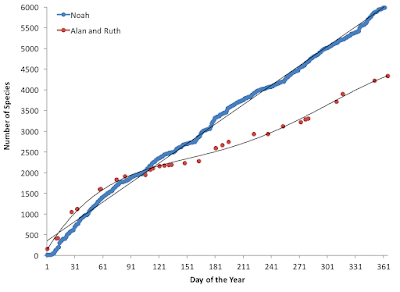 A nearly perfect linear trend in species' accumulation. This is how records are made! 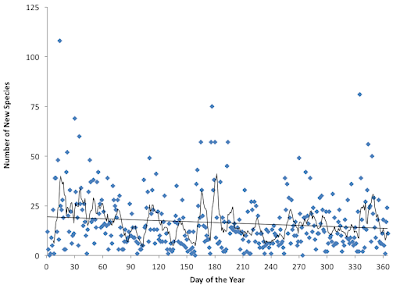 The highs and lows of a year's birding around the world...minimal diminishing returns! 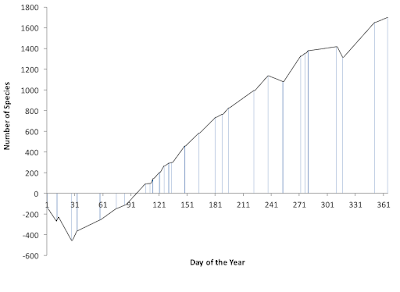 Relative to previous record holders, Noah started out slow in January...the rest of the year was remarkable. 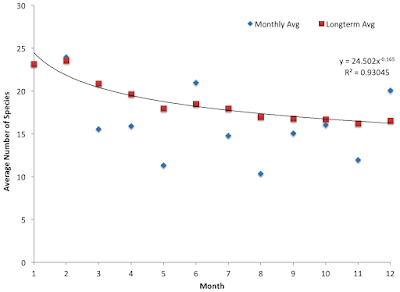 Month-over-month the number of new species added was highly variable, but the long-term trend was gradual diminishing returns.
Posted by Michael Preston at 8:28 PM