Today was our last day at Manu Wildlife Centre, and tomorrow we were to continue our journey down the Rio Madre de Dios. Unfortunately, over the past week, there had been rumblings of unrest in Puerto Maldonado, the capital city of the Madre de Dios region, that would pose safety or logistical constraints for our tour. Local miners, who squeak out a modest living gleaning gold flakes from muddy river beds were being cracked down upon by the government, who conducted regular raids on miners and destroyed their equipment unless they had legal status to mine (a good story on this issue can be found here). The news we were receiving was that the local airport was closed, and that some fighting/rioting was occurring in the streets. For us, this meant that our leg of the tour that included Puerto Maldonado was now off the books. The implication of this upset was that we would now have to head all the back up river to Atalaya, and then drive back to Cuzco. You could feel the angst among the group, but in these situations adaptation is necessary.

We spent our last day at Manu Wildlife Centre birding the local trails. Today we started at 6:00am, and there was a profound feeling of exhaustion setting in with the group. The morning sky was bright and sunny, and already the temperature was very warm, and the air very humid. We needed some good birds to ignite a spark of renewed energy, and that spark happened. My first lifer for the day was Rusty-belted Tapaculo, one of the smarter-looking tapaculos, of which this individual was uncharacteristically cooperative for a tapaculo in terms of showing well. The next five birds were all 'ant-somethings': Common Scale-backed Antbird, Bluish-slate Antshrike, Long-winged Antwren, Gray Antwren, and Spot-winged Antshrike (lifer). Over the next hour or so we continued to add good birds, among which four were lifers for me: Rufous-tailed Flatbill, Blue-backed Manakin, Pavonine Quetzal, and Olive-backed Foliage-Gleaner.

Our next target bird was Razor-billed Currasow, a bird that our guide Alex could hear calling off in the distance. On our way to the location of the calling bird we found our only snake of the trip, which was no wider or longer than a standard pencil. As we pursued the currasow we added Rufous-tailed Foliage-Gleaner and Elegant Woodcreeper for the day, and after about 15 minutes of bush-whacking we finally located our quarry. The views weren't great as it was essentially a bottom-up view, but the view was good enough for a tick before the bird took flight and was never to be seen again by us. 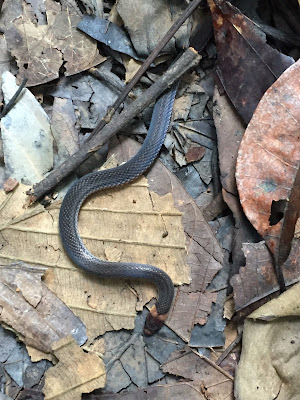 Back on the trails we slowly started to make our way back to the lodge for lunch. Along the way we targeted several birds and had excellent luck. Over a period of about 90 minutes I added an impressive string of lifers, 12 in total, which were: Dwarf Tyrant-Manakin, Dusky-capped Greenlet, Rufous-capped Anthrush, Great Jacamar, White-bellied Tody-Tyrant, Gray Antbird, Rose-fronted Parakeet, Plain-throated Antwren, Chestnut-winged Hookbill, Spot-backed Antbird, Wing-barred Piprites, and Rufous-rumped Foliage-Gleaner. Back at the lodge, in the heat of the day, we had a quick lunch which was immediately followed by a mid-day siesta. We re-convened at 2:45pm and worked the local trails until near-dark at 5:50pm. Bird activity was very muted, and I had only 11 species, of which two were lifers: Cinereous Mourner and Slender-billed Xenops. Our last bird of the day was Common Pauraque.

Another sunny day, and it was going to be a hot one as we made the more than nine hour trek back up the Rio Madre de Dios to Atalaya, and then by van to Cock-of-the-Rock Lodge. The river was much calmer than just a few days ago, and the river level had dropped by several feet as illustrated in the two photos below. At the rivers highest point, only 5 steps at the boat launch were visible; now there were more than 20. 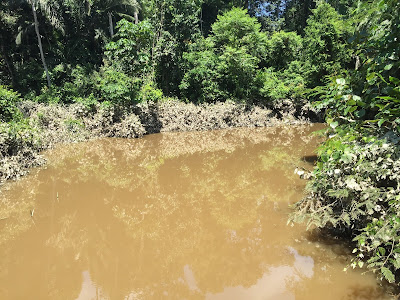 As water levels retreated, the muddy vegetation was a stark indicator of how much rain fell. 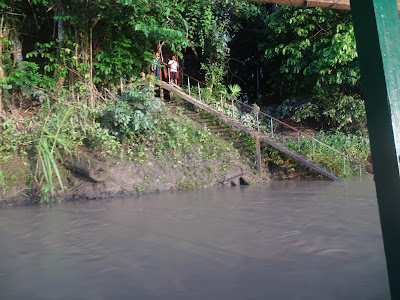 After receding, the river level was 10-12 feet lower than just 2 days ago. 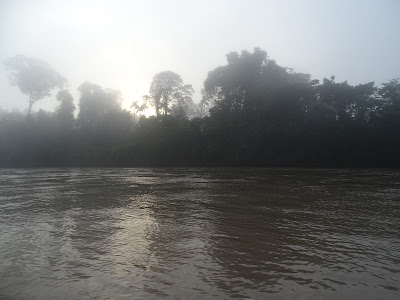 A bit of early morning fog paints a serene picture as we depart the Amazon.

We arrived at Atalaya at 3:10pm, and shortly after we were on our bumpy way to the lodge. Alex scheduled a couple of stops along the way, but we were very pressed for time. Our first stop, at 580 m elevation, was at 4:10pm at a small patch of bamboo. Alex earned his stripes here, because in just 20 minutes he conjured up three lifers: Yellow-billed Nunbird, Bamboo Antshrike, and Plain Softail. Back in the van,we blistered our way along to the next stop, which occurred at 5:05pm and was located at 770 m elevation. Here we spent only five minutes birding, but got our target bird, Black-backed Tody-Flycatcher, almost instantly. We arrived at the lodge just after dark, and we were clearly all exhausted. Dinner was much appreciated, and after wrapping up our notes for the day it was off to bed. Tomorrow was going to be another long travel day, which would include driving to Cuzco to catch a flight to Lima.

There was no time to waste today. We needed to be at the Cuzco airport by 12:00pm in order to catch our flight to Lima. Nothing could go wrong...yet it did.

We departed Cock-of-the-Rock Lodge at 5:05am, and we really did have no time to do any birding. However, as we wound our way up the eastern Andes, Alex scoured the road edges looking for key birds, and he found one. At 1,780m, just 35 minutes into our drive, we added Andean Potoo to our list. At 6:20am we had a flat tire...but not to worry I thought, just put the spare on. Unfortunately, the spare was also flat, having occurred yesterday when the van was making its way to Atalaya to pick us up. We were in the middle of nowhere, but a truck came along with an air compressor and so our driver opted to put the punctured spare back on the van (apparently it was less-punctured than the current tire) and use the air compressor to inflate the tire. We continued along, but you could hear the hissing air escaping, knowing we had fewer than 15 minutes before it was flat. Again we were stuck, and creative solutions were needed.

I figured we were destined to miss our flight, as I watched helplessly as the driver and guide tried to solve what I thought was the impossible. The next temporary fix was an interesting one...the driver found an old rusty screw on the ground, and the decision was to plug the existing hole with the very kind of object that causes flat tires. Of course, there was no screwdriver to put the screw in with, and so a large stone to pound it in with would have to suffice. The driver then wrapped the screw with a bit of plastic from an old bag that had also been discarded at the roadside. Apparently the plastic would 'improve' the seal; I had my doubts. After bashing the screw in, we now needed air. Another truck arrived after about ten minutes and we inflated the tire; their was a hiss, but not as bad as before. I figured we had another 15 minutes. The decision was to go...and go quickly. For those of us who were entirely unhelpful in this process, we added Streaked Tuftedcheek, Cinnamon Flycatcher, White-banded Tyrannulet, and Moutain Cacique.

As we travelled along we noticed that the tire did not appear to be deflating. We stopped briefly to check it and noticed that the hissing had stopped. By my assessment, the screw had been pressed further in as it was compressed against rocks on the gravel road. It was an ingenious solution, but we still needed to get to Cuzco, and we needed [reliable] tires that would get us there. Fingers crossed, we arrived at a village about an hour later where we were able to get both tires repaired (not replaced of course). This took about an hour, and there truly was no time to waste. Back on the road, we headed straight to Cuzco and stopped only briefly to add one new species, Common Miner, at 4,120 m elevation and at 10:20am. We quite literally pulled into the Cuzco airport at 12:00pm, and Simon and I successfully checked in on time. Our guide, with Malcolm and Howard, would continue the tour as part of an extension. 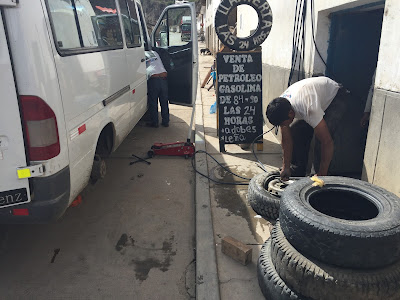 No time to waste, yet we needed two tires fixed quickly.

The flight from Cuzco to Lima was uneventful, but the scenery was spectacular. We arrived on time, and Simon and I went our separate ways; he on to his connection back to the United Kingdom, and me to a hotel across the street as I had nearly 14 hours to wait for my flight, which was departing at 2:00am the next day. That was it for birding in Peru. An amazing and adventurous trip lead by Manu Expeditions; shortly after arriving home we began contemplating a trip to northern Peru for 2017...more lifers and adventure awaits. Until next time, happy birding. 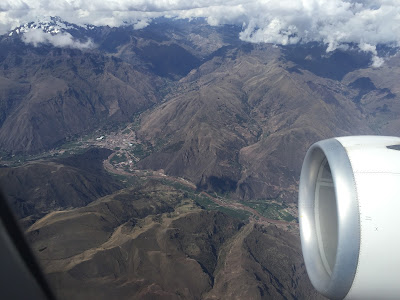 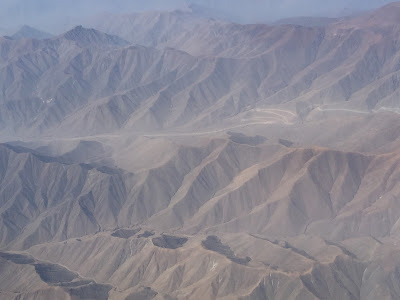 * the trip total of 259 differs from the actual total (555) because some 'species' we saw are not yet recognized (e.g., Ampay Tapaculo).
Posted by Michael Preston at 9:55 AM