Once again, wake up time was 5:00am. Simon was feeling utterly miserable from the altitude, but put on brave face to squeeze in a bit of birding. From the hacienda, located in Tampumayu, we took a short drive up a small side road that overlooked a river. In about 1 hour and 30 minutes we found all of our target birds, which included Black-backed Grosbeak, White-winged Black-Tyrant, Bare-faced Ground-Dove, and Pale-tailed Canastero. We also added Blue-and-Yellow Tanager, Chiguanco Thrush, and White-collared Swift. We returned to Tampumayu for a quick breakfast, but we were back on the road by 7:30am. 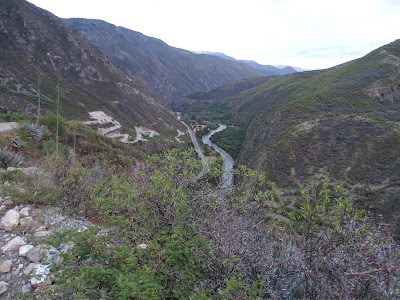 Birding the upper east slope of the Andes

Although Tampumayu was at 830 m elevation, and the initial part of our drive was downhill, we soon found ourselves rapidly climbing back up the mountains. By 9:40am we were above 3,000 m, where we found Rusty Flowerpiercer and Golden-billed Saltator. At 10:00am we were at one of Barry's favourite birding locations, at 3,630 m, a few miles from Abancay. Here I added several lifers, including Black-throated Flowerpiercer, Purple-backed Thornbill (initially denounced when I was the only who saw it, but shortly thereafter it was confirmed by everyone and apologies flowed like waterfalls...at least that's how I remember it), Apurimac Brushfinch, and Creamy-crested Spinetail. Other good birds at this location included Red-crested Cotinga, Sapphire-vented Puffleg, Great Sapphirewing, and Tyrian Metaltail. 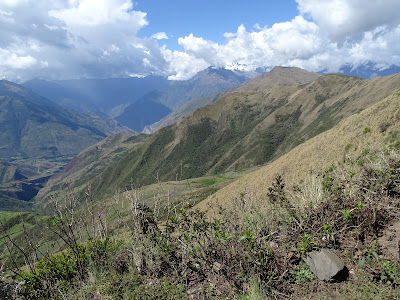 Traversing the upper grasslands of the Andes

We spent the afternoon making our way to Cusco, but along the way Barry had some key locations pinpointed for targeting some trip ticks. Slightly after 12:00pm, not far off highway 35, we entered Santuario Nacional Ampay, where we spent about 3 hours netting six lifers for my list: White-browed Chat-Tyrant, Apurimac Spinetail, Rusty-fronted Spinetail, Chestnut-breasted Mountain-Finch, Rufous-naped Ground-Tyrant, and Buff-breasted Earthcreeper. Before we ended our day in Cusco, Barry insisted we stop at some Inca ruins to look at some neatly arranged rocks; there were no birds here, and Howard found a novel use for at least one rock. Once at Cusco, Simon retired for the day, still feeling wrecked from altitude sickness. This evening marked the end of the tour with Barry as our leader, and tomorrow our new leader would be Alex Torres. 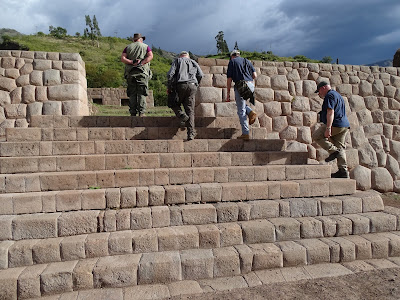 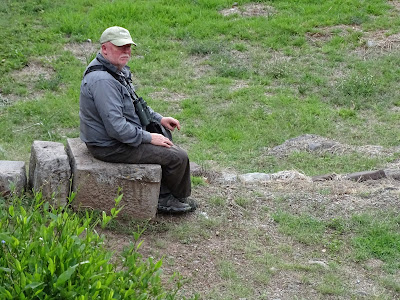 Because of transportation logistics, today we were able to sleep in until 5:40am, have a delightfully late breakfast at 7:00am, and depart form Cusco at 7:40am. Our first destination for birding was Huacarpay Lakes, which was located about an hour east of Cusco. This wetland was a wonderful site for birding and we quickly added a good variety of species, including Many-colored Rush-Tyrant (lifer), Plumbeous Rail (lifer), Yellow-winged Blackbird (lifer), Wren-like Rushbird (lifer), Blue-and-Yellow Tanager, Andean Duck, Bearded Mountaineer (lifer), and Yellow-billed Teal. After about an hour, we started making our way further east, but not before adding Andean Flicker (lifer) to the trip list. 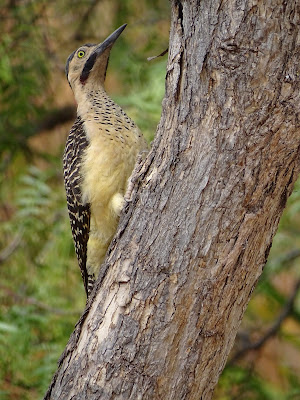 Unlike several of my previous birding tours, this tour had some days with particularly long drives to get from A to B. Today was one of those days, and we spent much of the day making our way to the Wayqecha Cloud Forest Biological Station. Along the way we had few stops to look for birds, but to add insult to injury we had nearly an hour's wait for road construction, and then nearly a 45 minute wait for a bus that was stuck in a creek. There was a bridge that crossed this creek, but recent rains had caused a portion of the approach to wash-out. Subsequently, vehicles traversed the creek about 100m upstream, up until when a bus attempted this and became grounded. Several people were on site, but we were quite literally in the middle of nowhere. One group of people was attempting to heave a very large boulder into a gap where the road washed out next to the bridge. Another group was trying to rock the bus free by quickly throwing rocks and earth beneath the wheels. We took the opportunity to do some roadside birding, but we were convinced we'd be held up for several hours.

Remarkably, it only took 45 minutes for those working on the bridge to create a makeshift fix, and the line of 8-10 cars, including our tour van, were able to successfully cross. During the 45 minutes we did have, we did manage to add some good birds, including Scaled Metaltail (lifer), Pale-legged Warbler (lifer), Tufted Tit-Tyrant, Rufous-breasted Chat-Tyrant, and Rufous-capped Thornbill (lifer). It was now late afternoon, and we only had time for one last stop before arriving at Wayqecha. This stop was at the summit of the Carreterra a Manu road, which when viewed in Google Earth (-13.2009, -71.6269) shows a distinct transition zone from dry to wet forest. Here we added Sierran Elaenia, Brown-bellied Swallow, Scarlet-bellied Mountain-Tanager, Brown-backed Chat-Tyrant, Moustached Flowerpiercer (lifer), and White-throated Tyrannulet. 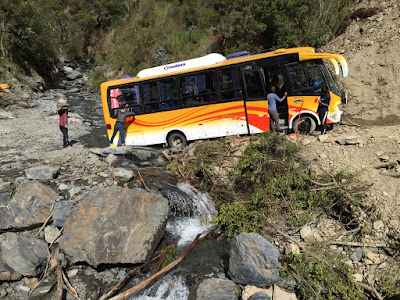 How not to cross a creek

We arrived at Wayqecha at 4:55pm, and as final daylight faded we had just 10 minutes to squeeze a few birds in, including Shining Sunbeam, Moustached Flowerpiercer, and Black-throated Flowerpiercer. Once dark, we then drove a few miles up and down the main road looking for night birds, which we were successful in finding a female Swallow-tailed Nightjar. We returned to the lodge, had dinner, compiled our notes, and headed to bed. Tomorrow we were to spend much of the day birding the Carreterra a Manu road to the Cock-of-the-Rock Lodge. 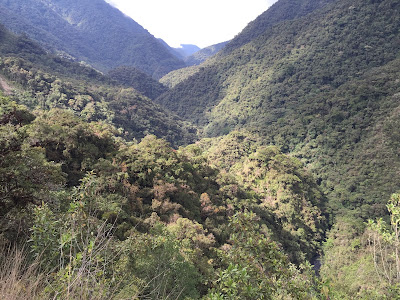 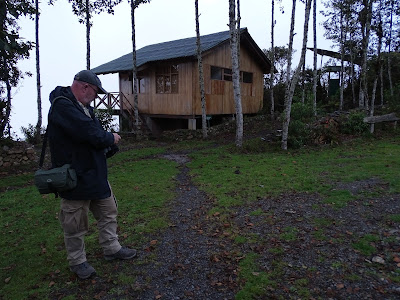 Simon, near one of the rustic research station cabins at Wayqecha

No time to waste today, as the alarm was ringing at 4:30am and we were on our way at 5:00am for some pre-breakfast birding. Our focus was on the research station and the main road which backtracked for about a mile to the summit. It was a beautiful sunny morning, and a big change from the previous evening which was cold, grey, and misty. Within minutes of day break there was incredible bird activity, and quickly we notched up a healthy species list with common birds such as Great Thrush, House Wren, Shining Sunbeam, White-collared Swift, and Band-tailed Pigeon. Further along the road the tanagers began to show themselves, and we quickly added Golden-collared Tanager, Blue-and-Yellow Tanager, Blue-capped Tanager, and Scarlet-bellied Mountain-Tanager. My first lifer for the day was a flock of ten Andean Parakeets, which showed nicely against the deep blue morning sky. We then added two species of swift: White-collared and Chestnut-collared. The next four species additions were all lifers, but they took some effort to obtain. First up was White-collared Jay, which after five minutes of first seeing them eventually gave us great views. We then added Pale-footed Swallow, followed shortly after by a small group of Black-faced Brushfinch. Our most challenging species was Hooded Tinamou, which was first detected by its distinct call. At first we weren't going to try to find it, but it was so temptingly close that the group urged Alex to at least try. In total, we spent at least 30 minutes creeping into the undergrowth and using call playback in an attempt to lure the bird closer. Finally, in what no doubt looked like a convoluted Yoga position, we were all able to peer through the tiniest of gaps in the vegetation and see the bird at close range. Definitely bird of the day! So far.

At 8:00am we were back at the research station for a quick breakfast, and by 8:40am we were ready to depart. First however, we had to deal with an interesting medical challenge. Prior to commencing our Peruvian adventure, Howard hurt his back in the UK and it was causing him some difficulty on the trip. You might recall the picture of Howard sitting on a rock at the Inca ruins; this was in fact a common sight as Howard needed to sit regularly to reduce the strain. Howard indicated this morning that his back was giving him quite a bit of pain, and would likely not venture far from the van. In having to do so, Howard would no doubt miss some good birds, and so our guide Alex searched for a solution. Minutes later, the solution arrived...a plastic blue chair that was to now become a permanent element of our excursions, and a permanent source of entertainment for Simon (ok, I was mildly amused by it too). So now, at each stop where we did some birding, the 'blue chair' slowly garnered its infamous qualities. In the picture below, Simon has carefully placed a leaf on Howard's hat, adding aesthetic value to the image. 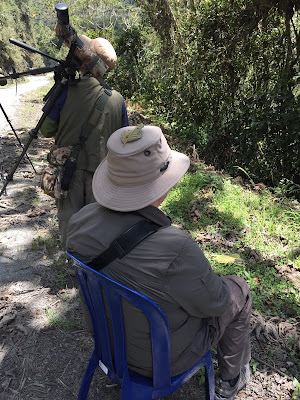 Ok, back to birding. Following breakfast our first stop was just down the road, at 2,900m elevation. Our target species here was Trilling Tapaculo, which we managed to get quite quickly (15 minutes) considering the generally stubborn nature of tapaculos showing themselves. At our next stop we added Supercilliaried Hemispingus (the bird name with the most vowels), Cinnamon Flycatcher, Grass-green Tanager, White-banded Tyrannulet, Barred Fruiteater, and Andean Solitaire. Further down the road, at 2,550m, we coaxed out with call playback a pair of Red-and-White Antpitta, a highlight for everyone. A bit further down the road we added Blue-banded Toucanet (lifer), Andean Guan, and Golden-headed Quetzal. Our final stop, at 2,410m, before having lunch, yielded two more lifers: Dusky-green Oropendola and Inca Flycatcher. We also had Mountain Wren and Citrine Warbler at this location, which were both new trip-tick birds. 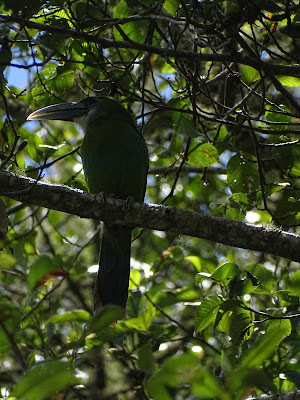 After our roadside lunch, we continued birding our way down the mountain valley. Along the way we came across yet more road construction. Depicted in the photo below, several workers were using nothing more than shovels, pick-axes, and wheelbarrows to repair a precariously steep and unstable road bank. Much of the repair included placing cuttings from trees and shrubs as a base to the road, and covering those cuttings with loose gravel and soil. By no means did this provide any confidence in road safety, and it was best to keep to the left as much as possible.

We spent the next three hours birding between 2,300m and 1,880m, stopping at six different locations along the way. Four of the six stops produced a lifer for me, including Bolivian Tyrannulet, Versicolored Barbet, White-crowned Tapaculo, and Black-streaked Puffbird. Other good birds included Three-striped Warbler, Capped Conebill, Long-tailed Sylph, Orange-bellied Euphonia, Golden-olive Woodpecker, and Andean Motmot. Just before arriving at our lodge we by-passed the Manu Cloud Forest Lodge. Here we saw a stunning male Andean Cock-of-the-Rock. At our lodge, the aptly-named Cock-of-the-Rock Lodge, we had about 20 minutes of daylight left to chalk up a few species at the hummingbird feeders, including Booted Racket-tail, Sparkling Violetear, Violet-fronted Brilliant, Speckled Hummingbird, Fork-tailed Woodnymph, and Golden-tailed Sapphire. We also added Bolivian Squirrel, one of few mammals we saw during our tour. 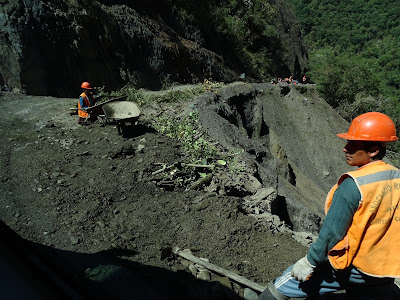