Other than tomorrow's long drive to the airport, today was to be my last day of birding in Morocco. I had a lot of ground to cover today, as I not only wanted to visit the mouth of the Oued (River) Massa and Oued Souss, but I also wanted to head back east an hour or so to check out some of the birds I blitzed past yesterday. To accommodate this busy day, I woke at 5:50am and departed the hotel at 6:15am. It was about an hour's drive from Agadir to the turnoff to the mouth of the Oued Massa, and another 15 minutes to the warden's house that bordered this National Park. Along the short drive from the highway to the parking lot I found another Little Owl sitting on an old rock wall.

Once at the warden's house I began to walk slowly down a dirt trail that paralleled the Oued Massa, stopping frequently to scan for birds both along the rivers banks and in the adjacent coastal scrub. Some of the first birds I saw included Little Egret, Grey Heron, Marsh Sandpiper, Caspian Tern, and Moussier's Redstart. My first lifer followed shortly after...a lone Barbary Partridge sitting ever-so-still in a stunted tree. I had great looks at the bird, but it may as well have been stuffed for lack of any movement. Further along the trail I found Sardinian Warbler, Eurasian Siskin, House Bunting, and Eurasian Curlew. Is I drew nearer to the mouth of the river it was quite apparent that a large number of gulls, distributed in two very large groups on two separate sandbars, were using the site as a roost. Upon closer approach, at least 800m away, the entire flock lifted into the air. I thought, "great, they're all going to leave before I get a chance to scan the flock". Naturally, as the flock took flight, I scanned the sky for signs of a raptor, perhaps a Peregrine Falcon, but saw nothing. Thankfully, the gulls landed.

On a first scan I counted more than 250 Lesser Black-backed Gulls, one Great Black-backed Gull, one Herring Gull, 30 Yellow-legged Gulls, and my second lifer for the day, 25 Audouin's Gulls. Shortly after scanning the flock, and content with working my way to the coast, one of the park warden's appeared out of nowhere and noticed I was birdwatching. Being immediately helpful, he asked if I had seen Black-crowned Tchagra...I had not, and indeed this was one of my target birds for the trip. The warden indicated he had just heard on in a bush above us, and within seconds of climbing part way up a small hill I saw the bird. Check!

Having thanked the warden and moving on a bit further I soon spotted my next target bird, and my primary reason for visiting the Oued Massa, Bald Ibis. A large flock of about 220 birds flew slowly by, which I was able to watch through my scope and have great views. The Bald Ibis (northern subspecies) is a critically endangered species and over the past 30 or so years has declined precipitously. One of the primary reasons for creating the Souss-Massa National Park in 1991 was to protect the Bald Ibis, and it appears to be working. In 2013 the population had its largest increase since 1980 and the population currently numbers around 450 birds.

Shortly after seeing the Bald Ibis I was greeted by yet another warden who was much more enthusiastic about talking to me. The warden carried with him a small pocket guide of local and common birds, and insisted on showing me every page and every species, indicating which species were present and which were not. He then insisted on taking me directly to the coast on his motorbike, to save me the walk. I retorted that I wanted to walk, but that didn't work at all. Before I knew it I was sitting on the back of what looked like a very unsafe motorbike with no helmet and one hand gripping my scope tightly in hopes of not dropping it. For all my resistance to ride, and the unsafe condition in which I had to do so, it was ironic that we only drove about 150m. We then walked to a sandy rise and gazed out at the open sea...no birds! After five minutes, and again insistent that I ride on the bike to another location, I fully and politely declined. This time it worked, and I was free to start walking back to the car.

On the walk back I spotted a few other good birds, including one Slender-billed Gull (my fifth lifer for the day), four Greater Flamingos, one Osprey, one Black Redstart, and one Eurasian Robin. Back at the car I slowly made my way to the other side of the river. Along the way I added another lifer, Eurasian Turtle Dove. It took a while to get to the other side of the river, as locating a bridge across it through a maze of gravel roads, dead ends, and no signs proved challenging. Once across the river however I found some great wetlands...or at least they looked great. I had hoped to find Ruddy Shelduck and Marbled Teal, along with several other ducks that were purported to occur in the area in large numbers during winter. Sadly, not a single duck could be found. Instead, I saw only two Eurasian Moorhens, one Glossy Ibis, 40 Barn Swallows, one House Martin, 20 Crag Martin, and eight Dunlin.

After my visit to the Massa wetlands, it was now time to head inland to the Plain of the Souss, an area that lies between the High Atlas and the Anti-Atlas. Although well-developed with cultivated crops, it still contains a rich diversity of habitats, including argana forest. Unfortunately for me however I was stuck in terrible traffic trying to get out there, and by the time I arrived I only had about an hour to look for good habitat and birds before having to turnaround to get to the Oued Souss while there was still daylight. Ultimately I had little luck finding any argana forest, and so alternatively I ended up driving a series of dirt tracks amid a sea of crops. None of the birds I saw were lifers, and none were particularly noteworthy. The best bird was a toss-up between Sardinian Warbler and Moussier's Redstart.

At 3:30pm I made my way back to Agadir, arriving at the mouth of the Oued Souss with just 45 minutes before the sun set. Once again, like so many sites before this one, the bird activity was slim. The best bird was a new trip tick, Eurasian Oystercatcher, but the rest were species I had already seen. I did however have a great look at a Slender-billed Gull, where the beak was distinctly red and not at all black as the field guide indicates it often appears. With just a few minutes before sunset I rattled off a few photos before returning to the hotel. It was New Years eve...my last bird of 2014 had been seen. 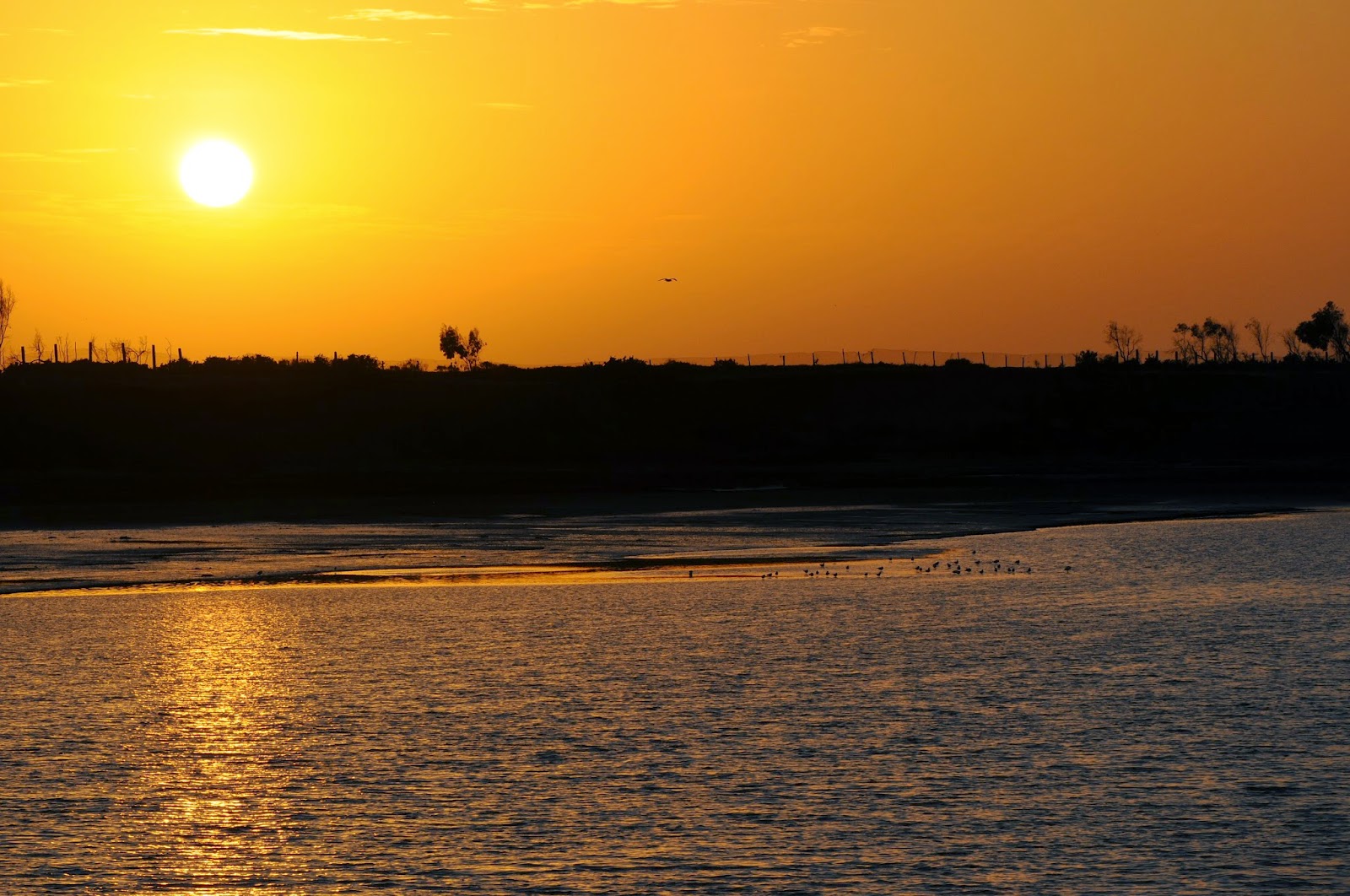 Sunset over the Oued Souss

Time to head back to Marrakech to catch my 12:00pm flight. This meant waking up at 5:30am and being on the road by 6:00am. It was just over an hour before it was light enough to see, and at that point I was already a third of the way Marrakech. The highway (a toll road) was wonderfully quiet...and as the desert began to illuminate under twilight I wondered what my first bird of 2015 would be. Fifteen minutes later that question was answered - Common Raven. Not exactly what I had in mind as a first year-bird for being in Morocco, especially considering I had only seen two in the past five days. Soon after seeing the raven I added Pied Wagtail and Merlin, and as I drew nearer to the city I added Eurasian Kestrel, Thekla Lark, Spotless Starling, and several other relatively common species. I arrived in Marrakech at about 9:30am, and made it to the airport with plenty of time to spare. In the terminal a lone House Bunting was pecking at crumbs...that was the last bird I saw in Morocco.

A few hours later, back at London-Gatwick in the dark and rain, a few House Sparrow's bounced about in a few shrubs under a street lamp. My bus departed on time at 5:40pm and two hours later I was back in Oxford. In retrospect the trip was a big success, despite missing several target birds I had hoped to see. Prior to going to Morocco I determined that 50 species could be lifers for me. Given the general distribution of common species to rare species, I estimated that seeing between 25 and 30 lifers would qualify as a successful trip; I got 28. 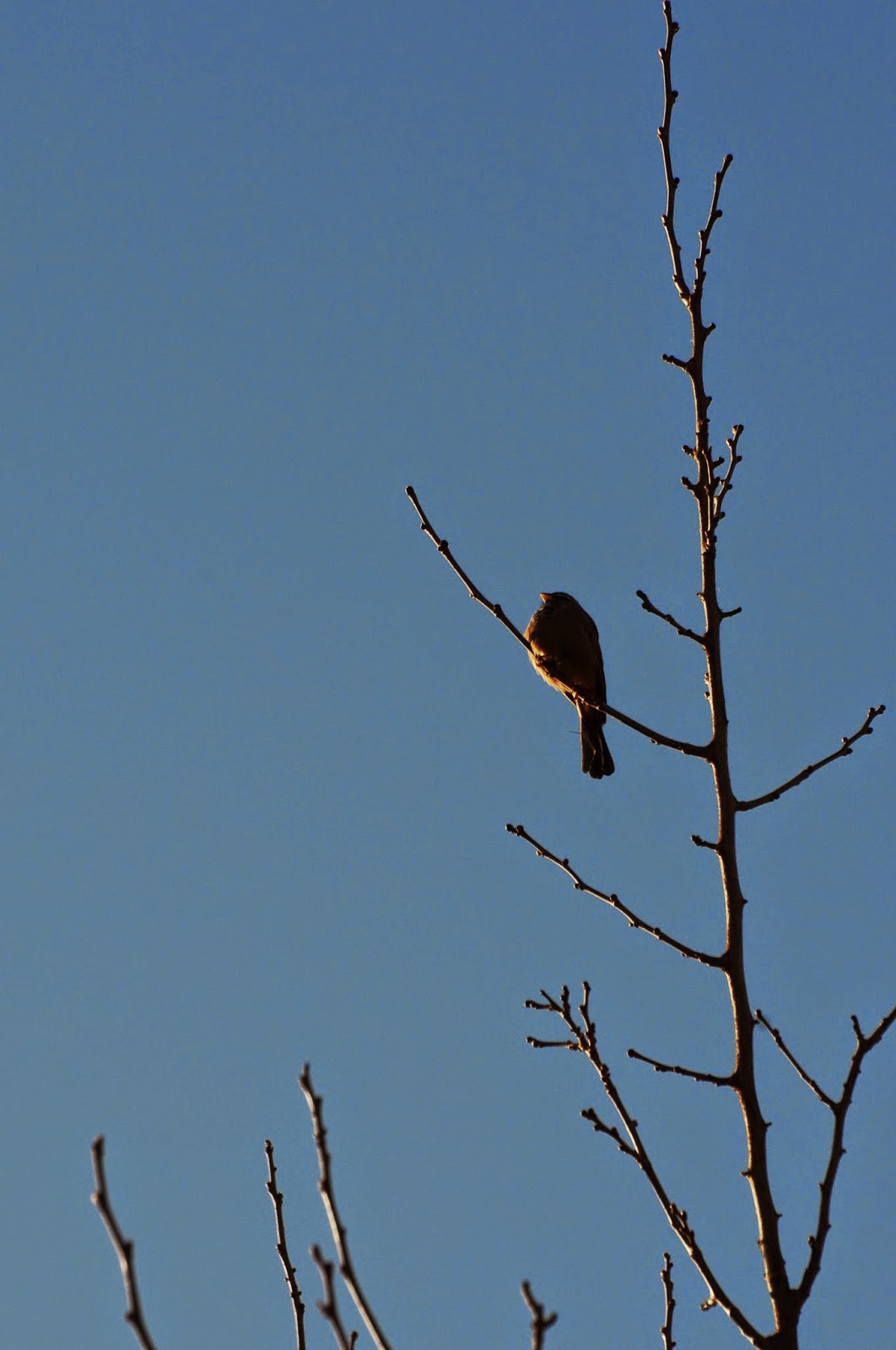 House Bunting (symbolic of my last bird seen in Morocco)
Posted by Michael Preston at 6:56 PM