Today I woke at 6:30am, and after a quick breakfast of pastries and coffee I was on my way at 7:20am. Fortunately I didn't have far to go to my first destination, Tagdilt Track, a literal track through the desert about one mile from my hotel. As described in A Birdwatchers' Guide to Morocco, Tagdilt Track begins just off the main road on the east side of Boumalne Dades, just past the military barracks. The military barracks were easily found, and sure enough a track ran south along the eastern border of the barracks and then eventually out into the open desert for several miles. For all the hype this location was given in the Guide, birding was incredibly slow. The Guide does say, "The first few hours can be disappointing if you are not familiar with this kind of habitat and the secretive behavior of some of its inhabitants and it essential not to give up too quickly". I spent nearly three hours on the "track", and in that time added only one Northern Shrike, a couple of Pied Wagtails, and just one lifer, Temminck's Lark. Upon returning to the military barracks I did observe a small pool of water that had attracted a few birds. Here I added two more lifers, Trumpeter Finch (one of my target species) and Thekla Lark. I also added to the trip list Meadow Lark, Gray Wagtail, and Cattle Egret.

Now approaching midday I decided to try another area for birds. The Guide refers to an area of the desert used as an informal and unmanaged garbage dump. The refuse area could easily be seen from the track I spent the morning on, as garbage was strewn across the desert, both as a function of uncoordinated dumping and strong westerly winds that redistribute thousands of plastic bags. Amidst the denser piles of garbage was a near-constant smoldering of refuse and a cloud of smoke as the sun ignited bits of garbage through the plethora of broken glass. As I proceeded down the track that entered the dumping grounds, a few more birds were present feeding on the abundance of flies, fly larvae, and food scraps. Here I added four more lifers over the course of about an hour and a half: Lesser Short-toed Lark, Thick-billed Lark (a target bird), Red-rumped Wheatear, and Tawny Pipit. I did add several more Thekla Lark's, Temminck's Lark's, and Pied Wagtail's, but overall the richness of species was low. 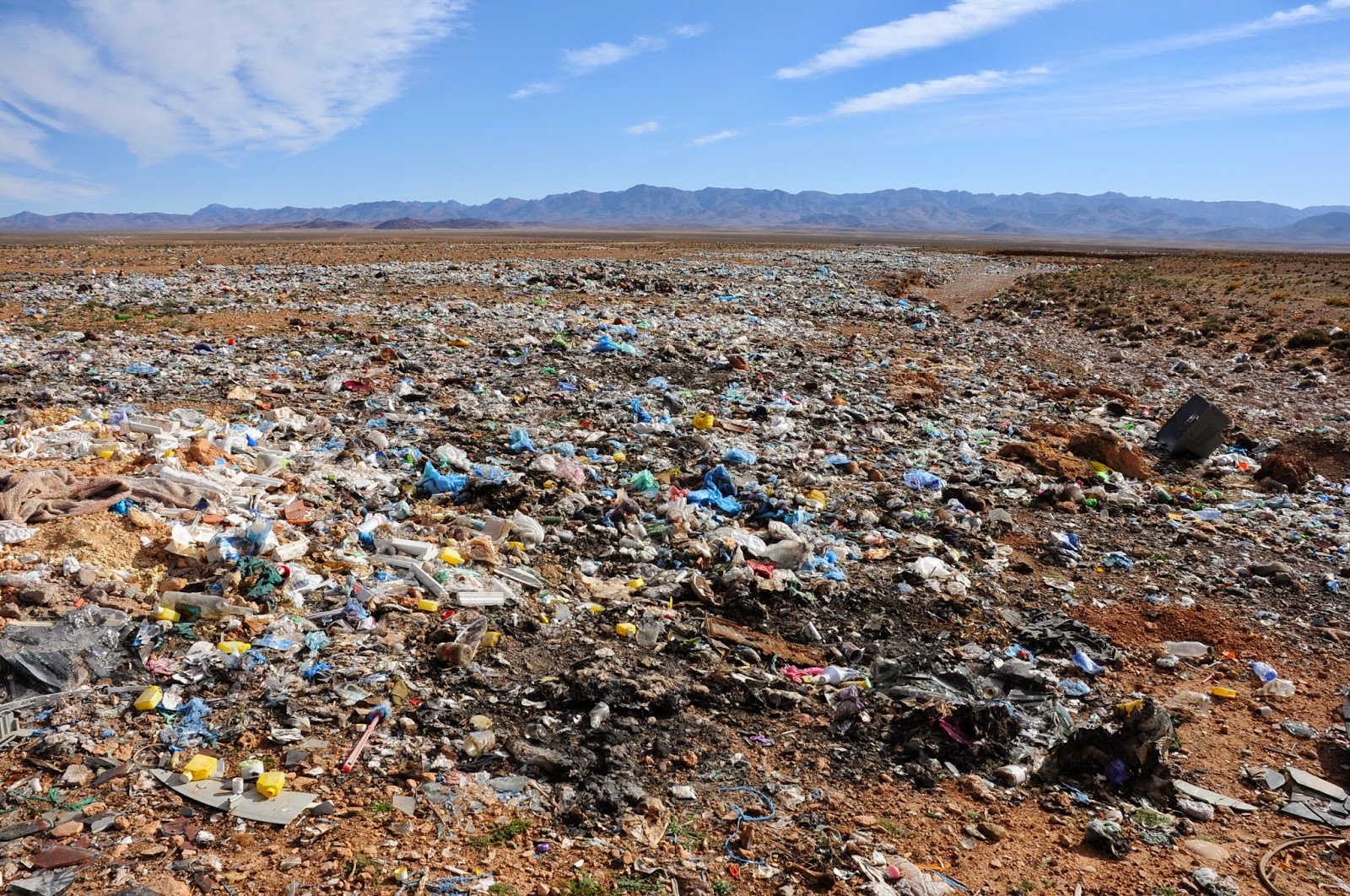 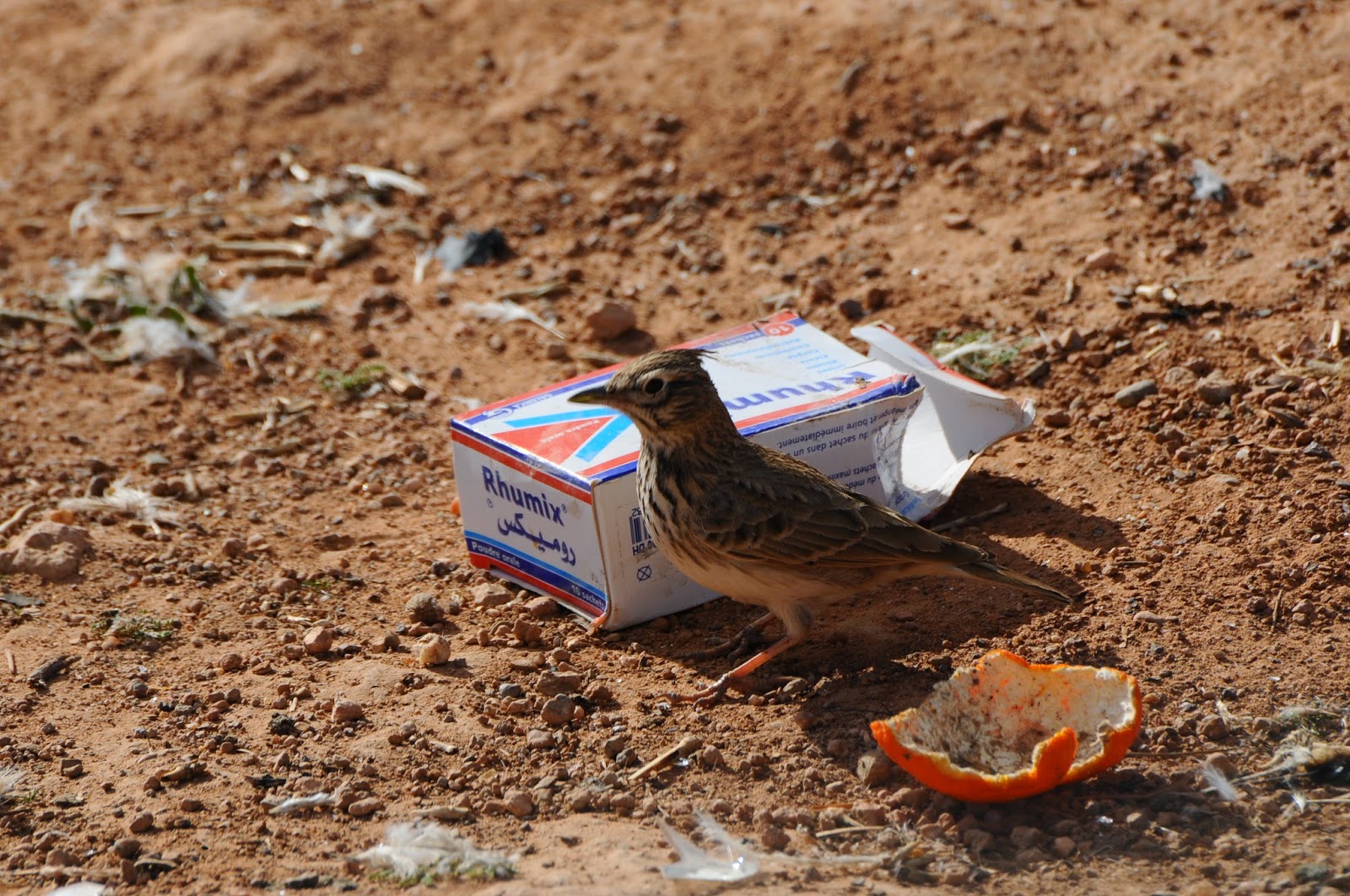 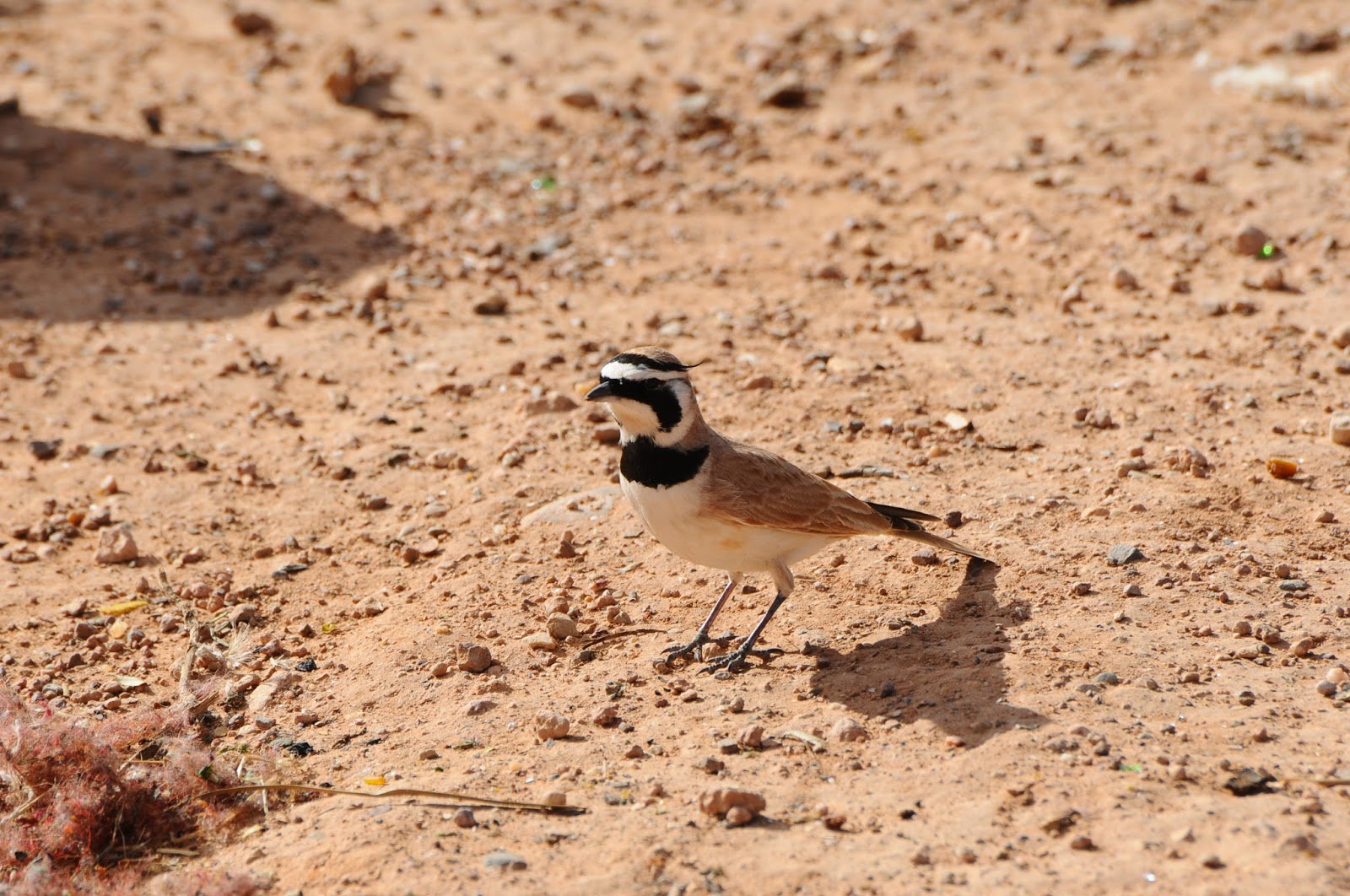 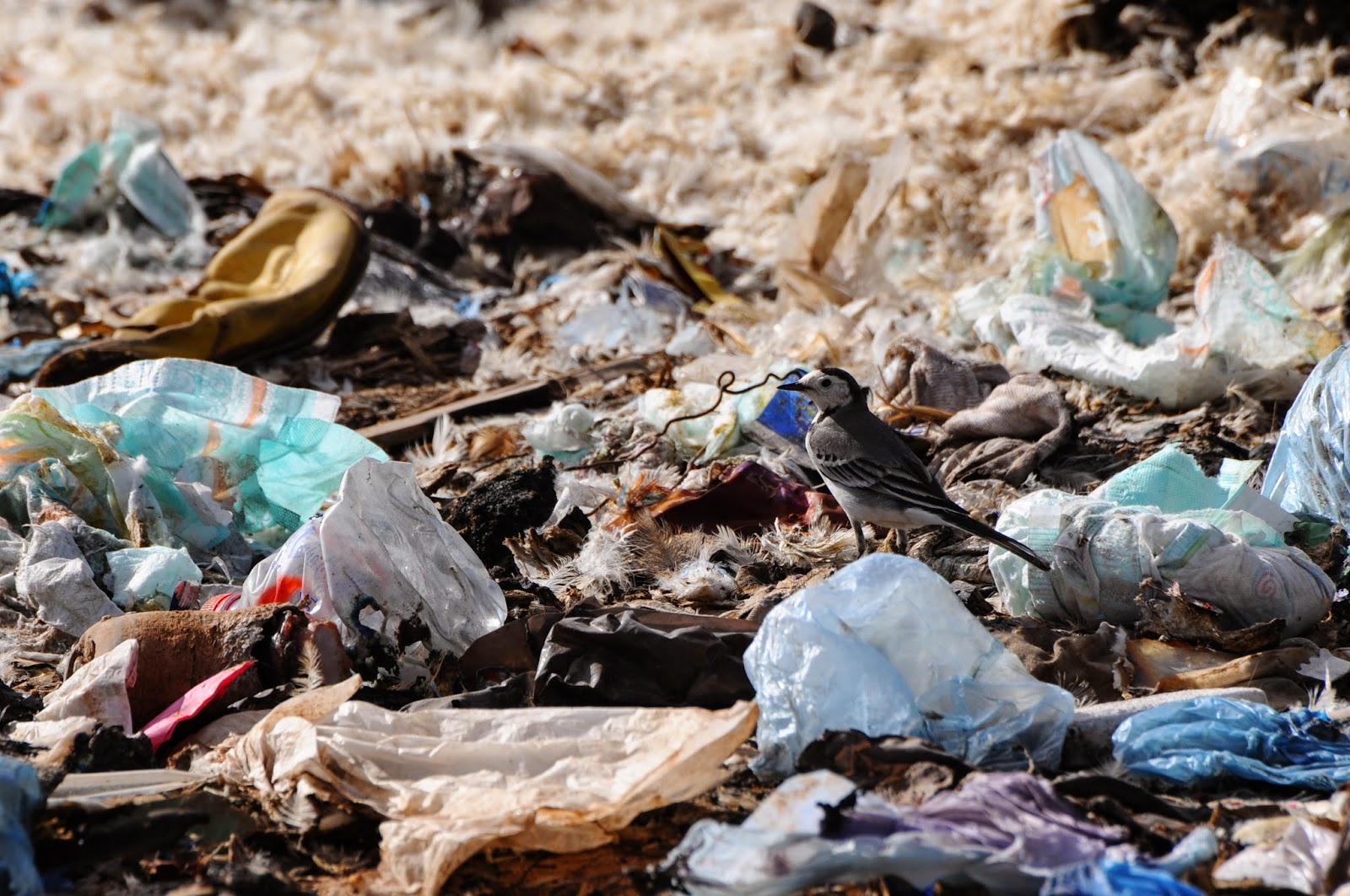 After birding for about another hour at Tagdilt, at which point the rate of return on birds had diminished substantially, I decided to drive for about an hour eastward in hopes of finding some new species. Unfortunately however, the pickings were very slim and no new species were added either to the life list or the trip list. I was a tad disappointed at some of the "misses" that I wanted to see, including Cream-colored Courser, Desert Lark, Bar-tailed Lark, Hoopoe Lark, Desert Wheatear, and any of four possible species of sandgrouse that occur in the area.

By now it was about 3:30pm, and time to head back to Ouarzazarte where I would be spending the night. My plan was to visit Ouarzazarte reservoir the next morning, but given I had enough daylight remaining today, I paid a quick visit down one of five possible tracks to see if there was anything interesting. In the span of about 30 minutes I saw White-crowned Wheatear, Northern Shrike, Pied Wagtail, Great Cormorant, Mallard, Eurasian Wigeon, White Stork, Winchat, Rock Pigeon, Eurasian Coot, Great-crested Grebe, and my last lifer for the day, Ferruginous Duck. Despite having much higher expectations for the day, I was rather pleased with adding eight new species to the list.

I woke at 7:00am this morning with good intention of being on the road a bit after 7:30am. Unfortunately however, breakfast wasn't scheduled to be served until 7:30am, and was actually served at 7:45am. Therefore, I ended up leaving the hotel at 8:00am. On the bright side, I only had a short distance to travel to my first location, which was the furthest western access point of Ouarzazarte reservoir. The area was relatively quiet and pleasant despite being immediately adjacent to the city, but as was par for the course on the trip so far, birding was rather slim. My first bird of the day was Linnet, followed shortly after by Common Stonechat, Northern Shoveler, Great Cormorant, Thekla Lark, and Black-winged Stilt. I also had a brief glimpse of a buteo, and although I was certain it was Long-legged Buzzard, I couldn't confirm the ID. However, as I watched through my binoculars the disappearance of the buzzard over some buildings, I caught glimpse of a small bird sitting on an old stone wall. It was a Little Owl, and my first lifer for the day.

There were few other birds at this first site, with only the addition of Rock Pigeon, Eurasian Collared-Dove, Eurasian Coot, Gray Heron, and Common Sandpiper to the day list. My next three stops were at various access roads along the northern edge of the lake. Collectively, it took about 2 hours to visit all of them, and the birding was fairly thin. Some highlights included Trumpeter Finch, Eurasian Siskin, Spectacled Warbler, White-crowned Wheatear, Black Redstart, Moussier's Redstart, and Ferruginous Duck. I missed another two target birds however: Marbled Teal and Ruddy Shelduck.

By about 11:00am it was time to start making my way southwest to the city of Agadir, located about 350km away on the Atlantic coast. I knew the drive would be slow, and so by leaving Ourzazarte early enough I would at least have some time to do some birding along the way if I spotted some key habitats or bird activity. Just west of Ourzazarte, and only a mile south of Tizagzaouine, I added my next lifer for the day, and one of my missed target species from yesterday, Desert Wheatear. A few miles further south and I added another target bird that I missed yesterday, Desert Lark. These two species were a nice reprieve from having missed them at Tagdilt Track where they were supposed to be easiest to find. 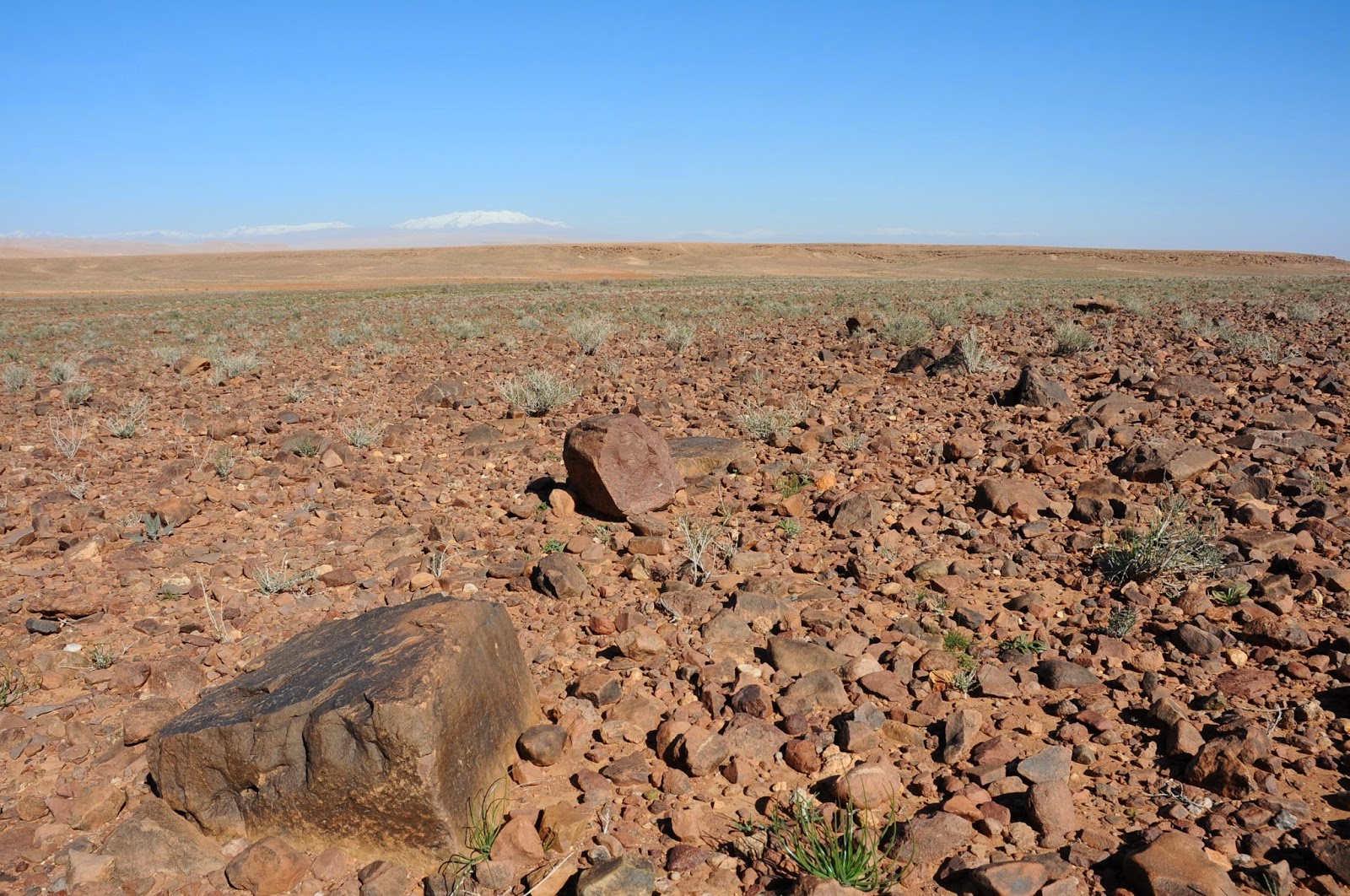 After several more miles I began to re-enter the lower Atlas Mountains, and at a small pond just off the highway I found another lifer, Crag Martin, and several Rock Sparrow's, Thekla Lark's, Meadow Pipit's, and a Moussier's Redstart. The next stretch of road was between Anzel and Taznakht where I found my second Desert Lark for the trip, a Dartford Warbler, two Eurasian Kestrel's, and a Black Wheatear. The final stretch of road was from Taznakht to Agadir, where the first half was quite pleasant and the second half was outright awful with incredibly slow and congested traffic, especially in the city of Agadir. Before entering the traffic mayhem I did find three Red-rumped Wheatear's, two Black Wheatear's, one Golden Eagle, and one Spotless Starling. I also saw two Common Ravens which I desperately tried to ID as Brown-necked Ravens, but with excellent views and light, no such conversion could be made. I arrived at my hotel in Agadir at 6:00pm, utterly exhausted from the long drive and intense city traffic. 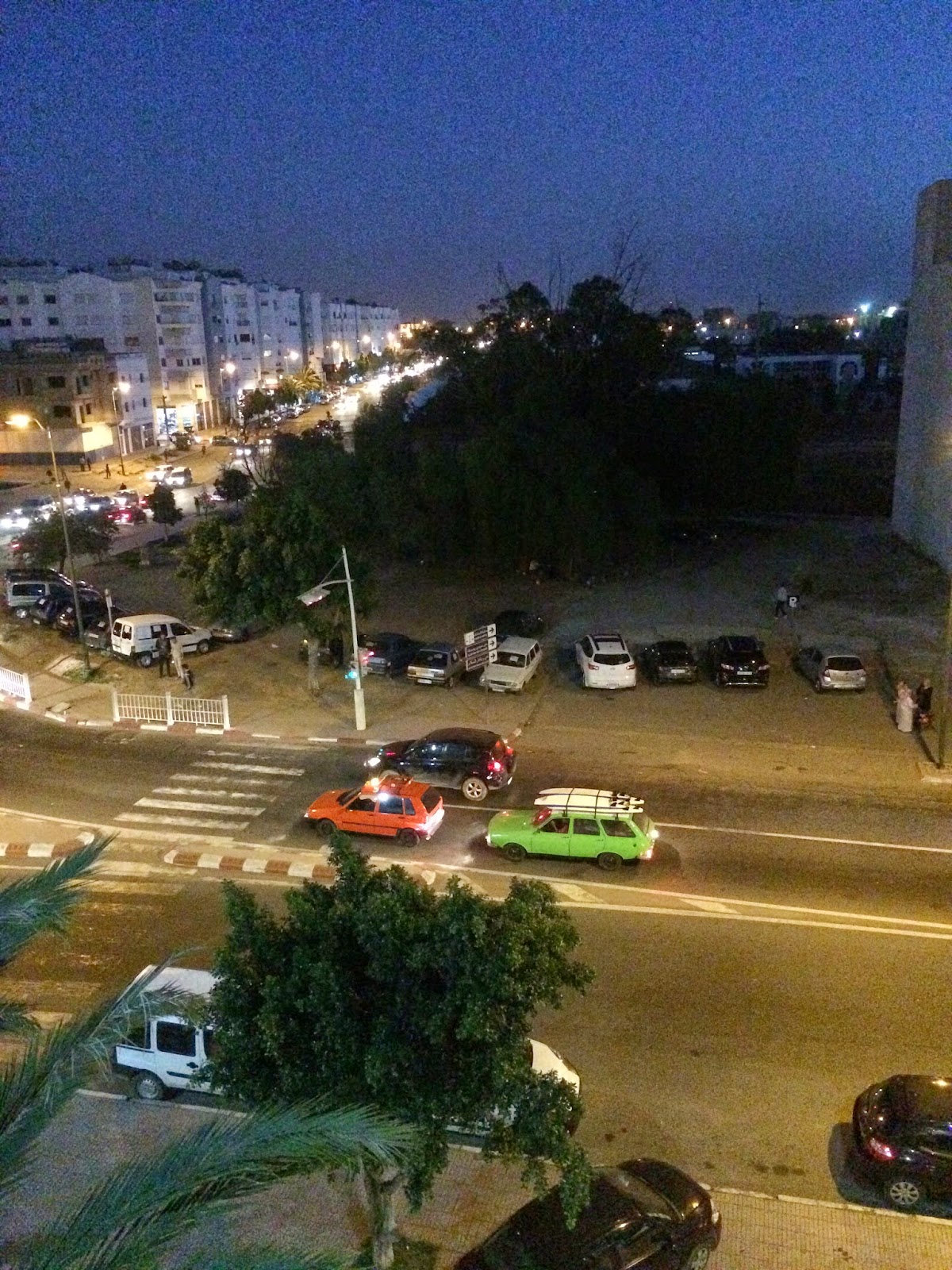 Downtown Agadir, from the Ibis Hotel
Posted by Michael Preston at 6:51 PM