On Saturday February 14, 2015 the Victoria Natural History Society once again ran its annual Valentine's Couples Bird Count, this being the 18th year that such counts have been conducted. The count begins at 6:00am and lasts until 12:00pm; couples are to tally as many species as possible in the 6-hour window and in the Victoria Bird Checklist region. Some couples do a "green count", using bicycle or bipedal power. For those seeking larger species' counts, a vehicle is most certainly required.

This was the third year Joanna and I participated in the count, having won in 2012 and placing fifth place in 2014. In 2015 ten couples participated, with Joanna and I placing first with 88 of the 114 species seen cumulatively by all couples. The following is an account of our six hours of mad-dashing, coffee-depending, food-depriving, sprint throughout southern Vancouver Island.

Beep, beep, beep, beep, beep...the ever-annoying sound of an alarm clock with an evil twist: 5:15am on a Saturday morning. Joanna and I were out of the house promptly at 5:55am, with our first stop being a gravel pit just down the road, and on our way to our usual Great Horned Owl site at Royal Roads University. The gravel pit instantly produced our first bird of the day, Canada Goose. We then headed immediately to Royal Roads, but after 20 minutes of intent listening we knew we were in trouble...our first dip. We tried a couple of back-up sites toward Witty's Lagoon but had no luck. Succumbing to defeat, we headed back to Colwood to grab coffee before heading to Esquimalt Lagoon. We stopped at the gravel pit in hopes of hearing Killdeer, and we got it - species number two.

Hot coffee in hand, we headed to Esquimalt Lagoon with windows open. Near Fort Rodd Hill we heard an American Robin singing, so pulled over to listen for possible owls and other songbirds that were waking up. We quickly added Pacific Wren, Spotted Towhee, Varied Thrush, and Song Sparrow. A robin giving an intense alarm call sparked some interest and so Joanna and I pursued the bird with flashlight in-hand. Unfortunately, we found no sign of the birds' concern...it just stood on the ground calling. We back-tracked to the car and two minutes later we were at the south end of the lagoon. We quickly added Bufflehead, Common Goldeneye, and Glaucous-winged Gull. We then drove expeditiously to the north end where we normally begin our count, stopping only briefly to add Black Turnstone (in case they flew away), Northern Pintail, American Wigeon, and Lesser Scaup. At the north end we added Bewick`s Wren, Mallard, Bald Eagle, Red-breasted Merganser, Surf Scoter, Horned Grebe, House Sparrow, Northern Flicker, and Red-winged Blackbird. Once exhausting that area, we slowly began our trek back along the lagoon, stopping frequently to scan for new species. Along the way we added Northwestern Crow, Brewer`s Blackbird, Steller's Jay, White-crowned Sparrow, Rock Pigeon, Common Loon, Double-crested Cormorant, Greater Scaup, European Starling, and Marsh Wren. 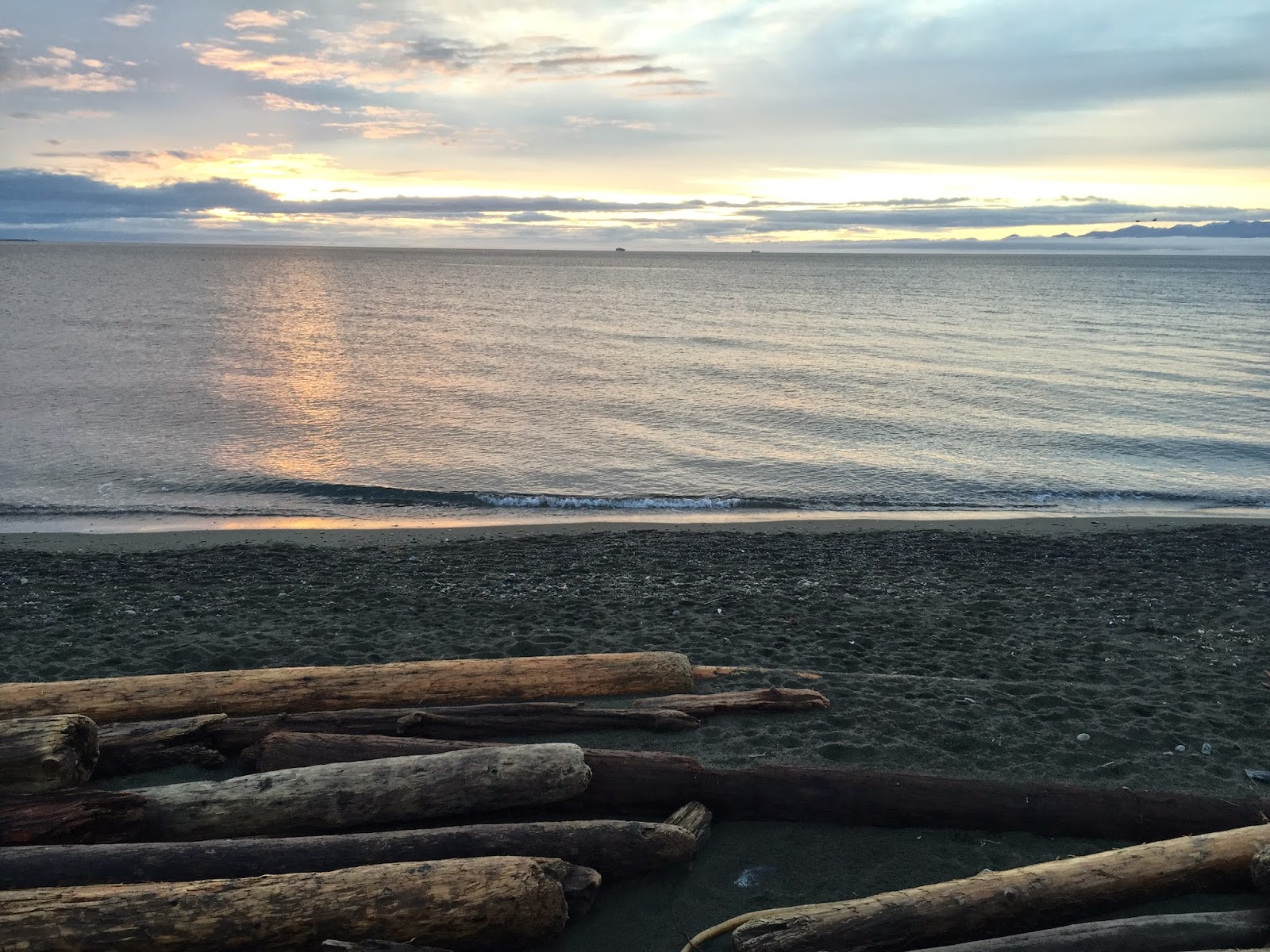 The birding at Esquimalt Lagoon was exceptional, and some good species for the day had already been ticked. In previous years we hadn't even found Steller's Jay, Marsh Wren or Varied Thrush so things were going well...and they continued to do so. We next added Pelagic Cormorant, Red-throated Loon, Common Raven (5 of them flying out over the ocean), Belted Kingfisher, Pileated Woodpecker, Red Crossbill, Barrow's Goldeneye, and Golden-crowned Sparrow. Upon leaving Esquimalt Lagoon and passing Fort Rodd Hill I spotted a Chestnut-backed Chickadee flying across the road. I immediately pulled over and we quickly added Red-breasted Nuthatch, Golden-crowned Kinglet, Brown Creeper, and Dark-eyed Junco.

Our next stop was Raper's Pond near Burnside Road. Here we added Gadwall, Northern Shoveler, Anna's Hummingbird, and two Mourning Doves. From Raper's Pond we headed to Panama Flats where we instantly observed a Red-tailed Hawk atop a telephone pole; this observation was shortly followed by sightings of Bushtit, Fox Sparrow, Lincoln's Sparrow, Purple Finch, Western Meadowlark, Green-winged Teal, California Gull, American Coot, Herring Gull, and Swamp Sparrow - our best bird of the day so far. From Panama Flats we headed to King's Pond for our token Wood Duck and got it...we also added Ring-necked Duck and by chance a pair of Ruby-crowned Kinglets. Three minutes at King's Pond was enough, and it was off to Oak Bay (Turkey Point to be exact). On the way to Oak Bay we spotted a Merlin flying by, but nothing else.

As we pulled up toward Oak Bay a small flock of American Wigeon were foraging on the grass at the edge of the road...I said to Joanna jokingly, "what are the odds of a Eurasian in there?" and no sooner had the words escaped my mouth did we spot a nice male...a species that can be challenging to find on any given day. At Turkey Point we added Harlequin Duck, Common Merganser, Pigeon Guillemot, Red-necked Grebe, Black-bellied Plover, Dunlin, and Great Blue Heron. From Oak Bay we moved along to Cattle Point, where I had little hope of any success because it is traditionally a popular place for people to hang-out, especially on a nice weekend morning. But, as luck would have it, Cattle Point delivered two Black Oystercatchers and a nice raft of Long-tailed Ducks...check, and check!

With about an hour and twenty minutes remaining in the count our next big push was to drive out to Martindale Flats. On the way I reluctantly stopped at Mystic Pond near Cadboro Bay as Joanna thought it might be a good place to pick up Downy Woodpecker. There was no woodpecker to be seen, but we did add a Hermit Thrush, another good bird for the count. Now on our way to Martindale Flats, we talked hopefully of finding Peregrine Falcon, Northern Shrike, Greater White-fronted Goose, and possibly even a Snow Goose. We even needed Trumpeter Swan, as our "guaranteed to get Mute Swan and Trumpeter Swan at Esquimalt Lagoon" was a total bust. Once at Martindale Flats we did find Trumpeter Swan, and conveniently in some trees where we stopped to look at the swans, we added Downy Woodpecker. As for all of the other Martindale hopefuls, nothing! We did however get a a gorgeous male Northern Harrier, soon followed by a female. This was my bird of the day as harriers on southern Vancouver Island are less common than Swamp Sparrows in winter (at least so it seems).

Having exhausted Martindale Flats we were now at about 11:20am...just forty minutes to go. Joanna and I had a Great Horned Owl nest nailed down near the Victoria airport, and running out of possible options, we decided to head there for another tick, and tick it was. Immediately afterward, near the new Canadian Air Force helicopter hangar, we added a beautiful male American Kestrel, check. Now it was 11:35am, so we decided to check out Patricia Bay just around the corner. We were not expecting to add anything new, but our expectations were quickly dashed when we found Mew Gull and White-winged Scoter. Just 19 minutes remaining...a quick scoot up toward our office where there is usually a Eurasian Collared-Dove...we found a dove but couldn't get a good look so I jumped out of the car to get the scope on it...confirmed...and what did I hear singing above...a Sky Lark...our eighty-eight and last species of the count. We did have a solid nine minutes to spare and made a mad dash to Elk Lake in hopes of a Pied-billed Grebe or Mute Swan, but with less than 60 seconds to spare we located neither. 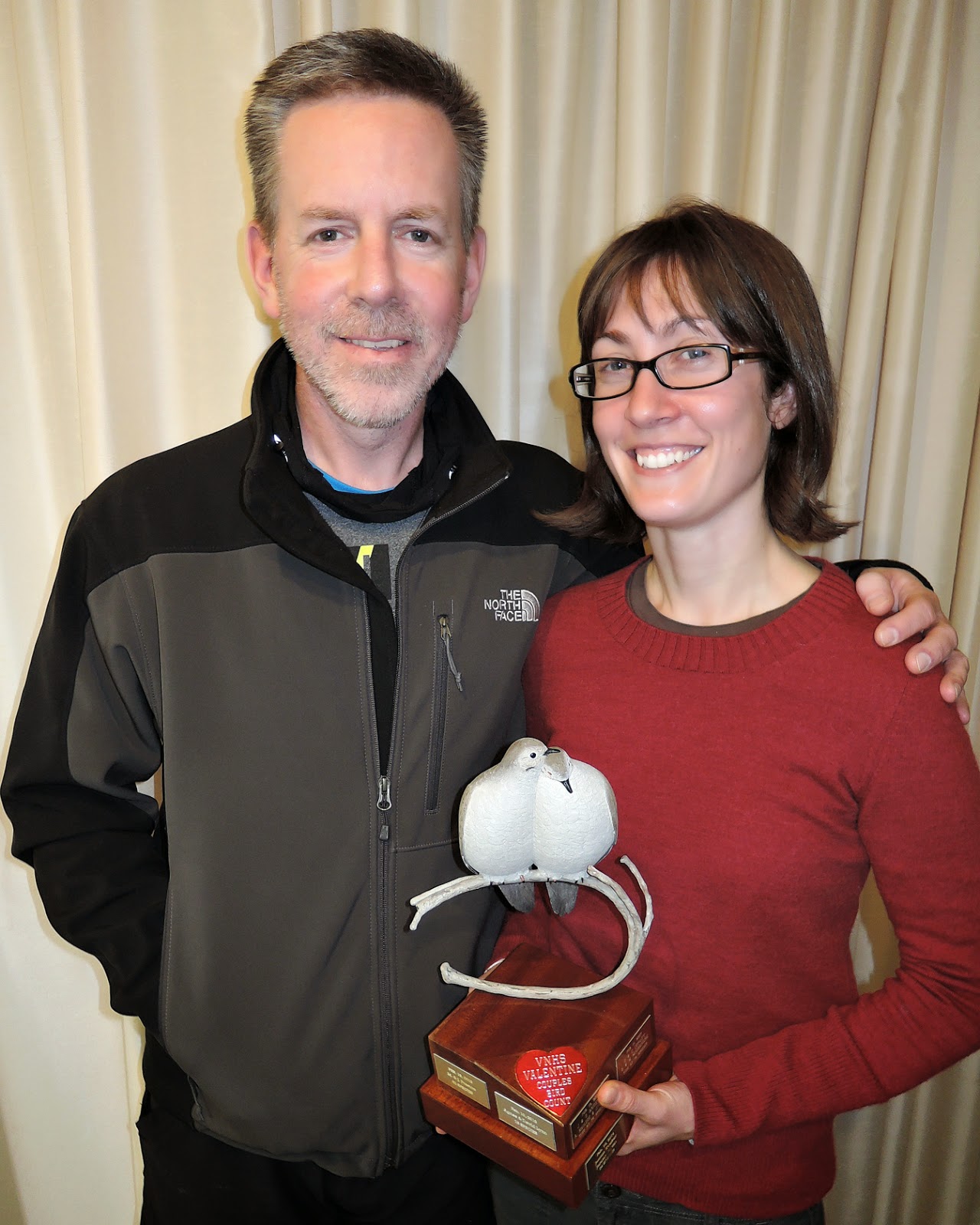 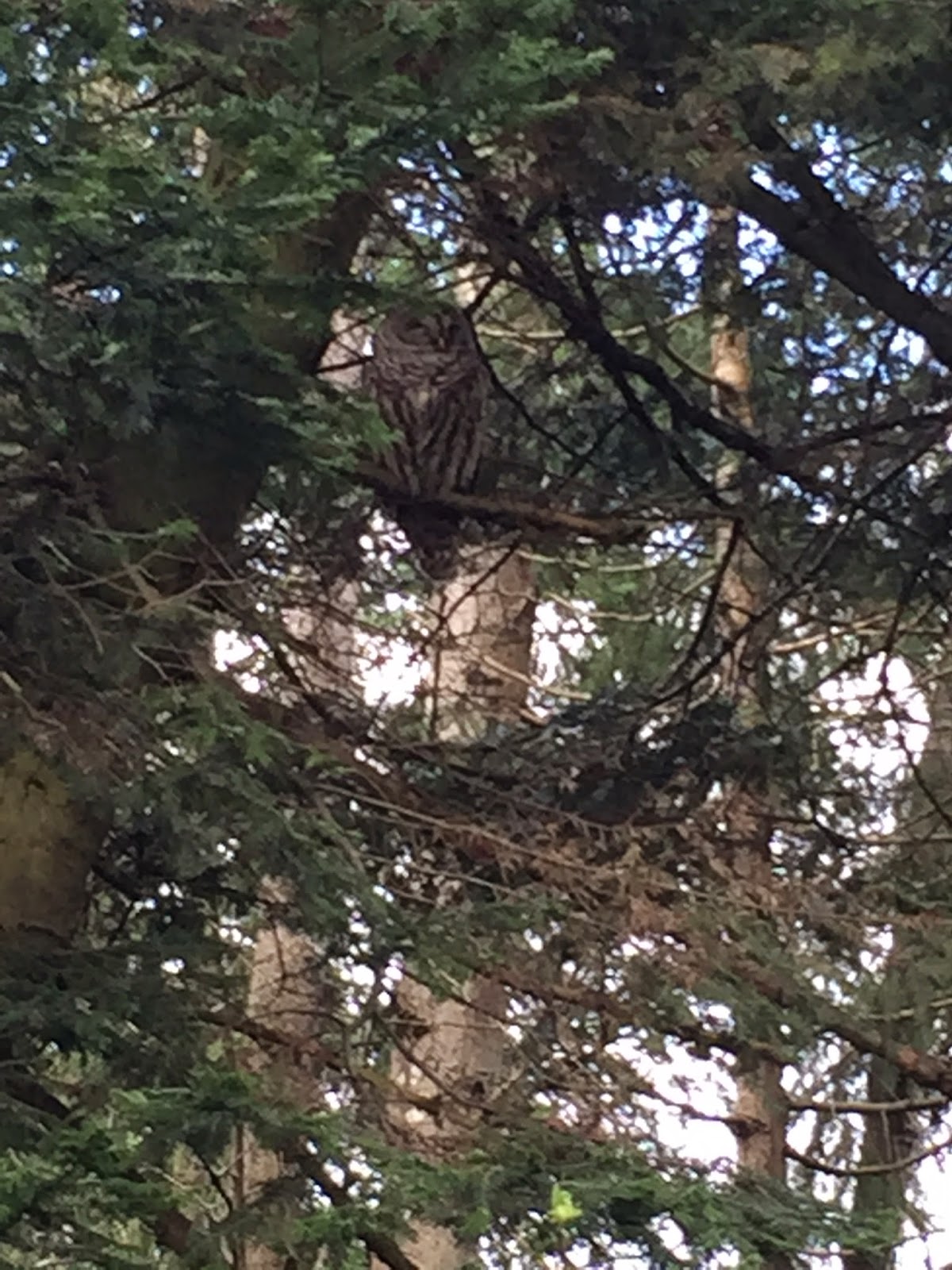 Posted by Michael Preston at 8:56 PM