Hard to believe, but Noah has been birding the globe, almost non-stop, for 344 days! I wasn't going to do another stats update, but at the request of one reader, here's a brief but updated summary.

The linear trend I've been using since starting this series of posts still maintains a very strong fit to Noah's species accumulation data. Even with the addition of data through November and early December, the addition of new species continues to show no sign of plateauing. In fact, beginning December 1st, Noah's species accumulation has seen a sudden resurgence, and was bolstered quite remarkably by his second biggest tally of new species (81 species) since January 14. Using the linear regression equation presented in the figure below, Noah's estimated year-end tally is 6,065 species (+/- a surprisingly small margin of error given the very good data fit; R-square = 0.99). 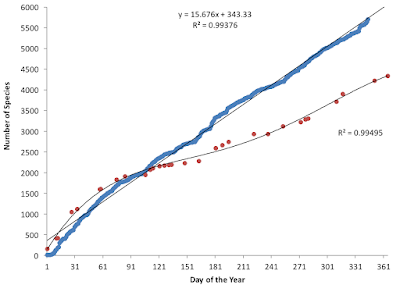 The figure below illustrates the gap between Noah's tally, and the same year-to-date tally of previous record holders Ruth Miller and Alan Davies. From about the end of March Noah maintained a relatively constant rate of gap-widening, with a small dip occurring only on September 10 and November 13. As of December 10, Noah can do no worse than to exceed the previous record by 1,366 species; if he hits 6,000 species the difference will be a whopping 1,659 species! 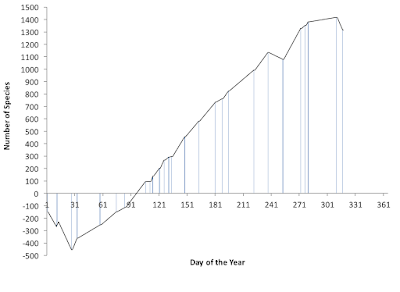 The figure below illustrates the daily tally of new species added to Noah's year list. The long term trend has been declining gradually (defined by linear trend line), but the 7-day trend (non-linear trend line) tells an interesting story. Perhaps most interesting is the recent spike occurring in the first week of December; no doubt a direct result of landing on a new continent (Australia). 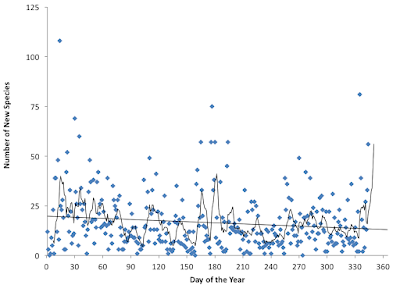 In my previous post I attempted to take into account the very small rate of diminishing returns to add a small correction to the linear trend prediction. The diminishing returns curve suggests Noah should average 16.19 species per day for the month of December. This would result in the addition of 340 new species in the remaining 21 days of December, for a grand total of 6,046 species; 19 species fewer than what is predicted by the linear trend alone. 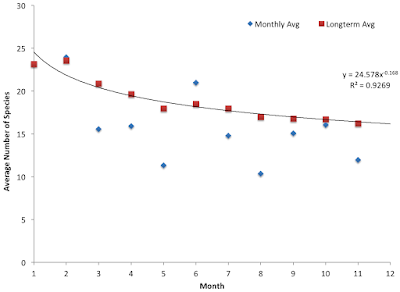 Posted by Michael Preston at 7:17 PM