It appears Noah has no plan to halt his birding adventure after achieving this incredible record, so as he continues, with just 66 days remaining, the question remains, what will his final tally be? Since I began tracking Noah's progress on March 12 I've predicted, through the use of regression analyses, that Noah will see more 6,000 species by the end of the year. While my final-tally predictions have gradually decreased over time, largely as a result of diminishing returns, the prediction as of today is still on target. But let's take a closer look at the law of averages...

In the figure below, the average number of new species Noah has added per month, and the running monthly average of number new species added, is provided. Using a power function to assess trend, there has been a gradual decline in the number of new species added. This average however is well-explained by time (months), with an R-squared value of 91.6%. Therefore, we can reasonably predict the average number of new species that Noah will see in November and December, which will be added to his finally tally. The functions work out to 16.47 species per day in November (494 species), and 16.24 species per day in December (503). As there are 4 days left in October, and his current long term trend up to October 27 is 16.73 species per day, he could also reasonably add another 66 species in the remainder of October.

Summed together, Noah has a reasonable chance of adding 1,063 more species to his October 27 total of 5,014. That would land him at 6,077 species. If I use the daily counts, and the linear trend analysis that I have been using throughout the past 7 months, his predicted year-end tally will be 6,141 (see lower figure).

All things being equal, Noah has a strong chance of hitting 6,000 species, even if he averages one species less per day than his current average of 16.73.

Regardless of his final tally, I've enjoyed tracking his progress and wish him all the best in his endeavours. His achievement to date is nothing short of remarkable, and at this point, every new bird is icing to the 5,000 species cake. 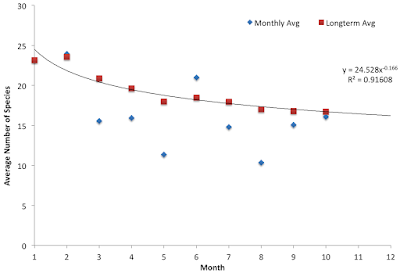 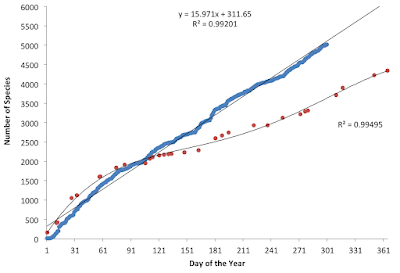 Posted by Michael Preston at 7:20 PM