In my previous post I described Noah Strycker's quest to see 5,000 species of birds in one year. I wrote about the species accumulation curve and some of the challenges with the law of diminishing returns. One thing I did allude to was, if planned carefully, it may be possible to move around the globe strategically enough so as to not spend too long in the diminishing phase of the accumulation curve before moving to another area where rates of return are higher. That is, with a goal of 5,000 species and a global total of more than 10,000 species, it is plausible to stay relatively close to the steep part of the accumulation curve for most of the year.

Since my first post on March 12, I've updated Noah's species accumulation curve up to, and including, April 6. I've also added an interesting element...the actual accumulation curve for current Global Big Year record holders Alan Davies and Ruth Miller. In Alan's and Ruth's book, The Biggest Twitch, they reported at fairly regular intervals what their accumulated species count was. These data are reflected in the figure below with red dots. Their data clearly does not fit a typical logarithmic accumulation curve...in fact, it's actually a 4th order polynomial function, but let's ignore the details of that for now. Of note however is that their curve has two relatively short, steep sections and a comparatively long and less-steep section in the middle. Noah's goal should be to avoid long, less-steep periods as much as possible, and to focus on the steep.

Another thing to note, which will be immediately obvious to anyone who has read The Biggest Twitch, is that the route travelled around the globe by Alan and Ruth is vastly different than the route Noah is undertaking. At first glance of the figure below it would seem Alan and Ruth chose the better route, as Alan and Ruth, up until April 6, have out-paced Noah's rate of return. But this, as the data clearly shows, is about to change. In fact, at the time of this writing (April 8), Noah is most certainly ahead of Alan and Ruth. Noah's species accumulation rate certainly appears to be slowing as of late as he works his way north through South America and is about to enter Central America. Will it slow enough to track Alan and Ruth for a while, or will he continue to have remarkable success? Time will tell.

Lastly, in my March 6 posting, I used Noah'a daily accumulation data to predict, using linear regression (as that was the best fit at the time, and still is), the date when Noah would 'hit' 5,000 species. At that time it was July 24. Now, with more data available, I've revised that prediction to show in the summary table below, using 15 day intervals, when the big day may be. As originally predicted, it will gradually move further away...but not to worry, yet. Noah still has 4.5 months to keep on track. Good luck Noah. 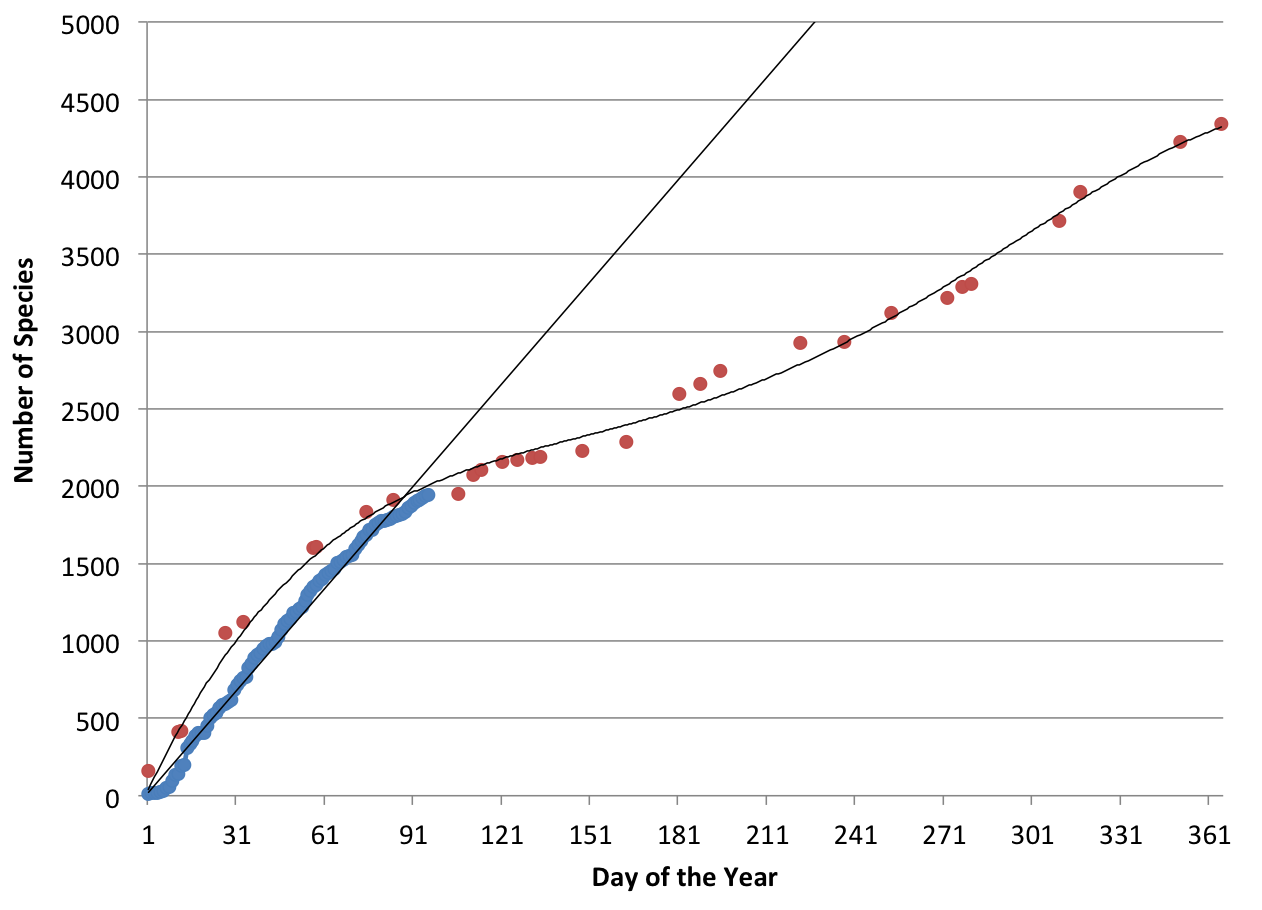 Posted by Michael Preston at 7:37 PM