June 30, the last day of six of twelve months of non-stop global birding for Noah Strycker, or in other words, the halfway point (technically, in days, July 1 is the halfway point). In continuing my analysis of Noah's trend toward seeing 5,000 species in a calendar year in an effort to break the current world record of 4,341 species, I have updated the trend graph to the end of June and have provided some additional visuals. I've also, for the first time, made a prediction of the total number of species that Noah could see based on the trend analysis of the first six months.

The first thing to notice in the updated trend is that a linear trend still best explains the rate of change in species accumulated over time. I have added the R-square value for stats geeks who want to know...in essence, R-square is the amount of variation in the rate of species accumulation explained by time (i.e., days spent birding). The red dots, as previously explained, represents current record holders Alan Davies and Ruth Miller; a fourth-order polynomial trend line explains 99.4% of the variation in their species accumulation over time. The blue dots, which represent Noah's data, indicate that after six months a linear trend explains 98.1% of the variation in Noah's species accumulation trend. Of interest in Noah's trend is that he started out relatively stable, with a small dip as he approached 2,000 species. The pace then resumed up until about 2,500 species when the accumulation became, well, erratic. In fact, there are two particularly steep sections of the accumulation curve between 2,700-3,000 species, and 3,050-3,400 species. Those must have been some amazing birding days! When I read about Noah sitting in New York waiting for a replacement plane however, and adding nothing to the list...well, I think that is self-explanatory. 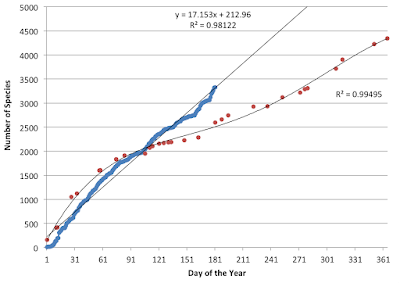 The predicted date when Noah should hit 5,000 species continues to remain, well, reasonably unpredictable. As of June 29, the predicted date of hitting 5,000 species is October 7, still leaving nearly three comfortable months. Since my last update on March 31, the predicted date has slipped by 58 days, or by about 0.6 days per day. As can be seen in the graph above, any time spent below the trend line will cause the estimated date to get further away (i.e., rate of increase is slower than expected), and any time above the trend line will cause the estimated date to get closer (i.e., the rate of increase is faster than expected). In just the last day of June, Noah popped above the trend line for the first time since early May. 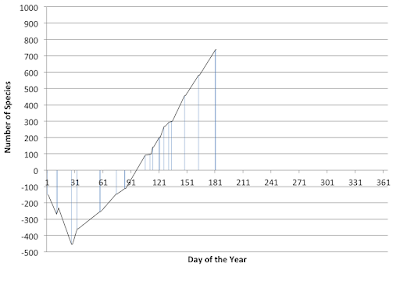 The last figure provided below illustrates a 7-day moving average of new species added to Noah's big year. No doubt there is a lot of day-to-day variation, and there is a reasonably predictable cycle which without testing my own suspicions, probably relates to moving to new geographic areas that cause "releases" from staying in any one area for two long and suffering from diminishing returns. As I indicated in my first post, the key to Noah's success (and for anyone who might try in the future) is to strategically move around the globe at the right time and to the right places so that the species accumulation curve seldom gets a chance to asymptote (i.e., plateau). So far, Noah has done a pretty good job of doing that. Interestingly, out of 181 days of birding, he has had just one day where he added more than 100 species to his year list; 95.6% of the days have resulted in 50 or fewer new daily additions. 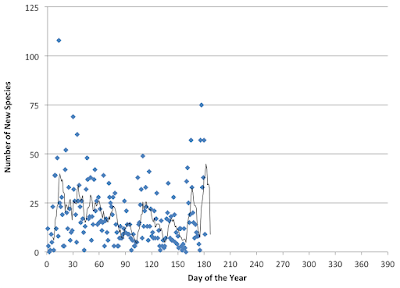 Lastly, as I alluded to at the start of the post, is a prediction of how many species Noah will see by the end of the year. I think hitting 5,000 is inevitable, so assuming he keeps going beyond his goal, until December 31, the big question is: How many species will he see? Using the linear regression model that creates the trend line in the top-most figure, I estimated that on December 31 his total will be 6,474 species. The lower and upper 95% confidence intervals of this prediction are 6,455 and 6,492 species respectively. For those who are submitting guesses to Audubon, use this as you will...it will probably change :)

Until next time...happy birding...and number crunching.
Posted by Michael Preston at 4:54 PM