For those who don't know who Noah Strycker is, he's a young man with a lofty birding goal...to see the most number of bird species in the world in a single calendar year: 2015. Specifically, he's set himself a nice round goal of seeing 5,000 species. For more information about Noah's pursuit, and to watch his species tally grow near-daily, check out his page here: http://www.audubon.org/news/the-species-list

What interests me is, is it possible to predict the outcome based on how he's doing so far? It is a fairly well understood phenomenon in the biological sciences that when counting species, be it birds, insects, amphibians, mammals, plants...whatever, there is a universal pattern in the species accumulation curve, which is logarithmic. On the y-axis (vertical) there is the number of species counted, and on the x-axis (horizontal) is the unit of time or space over which things are counted. For example, for a person counting species of plants in 30 1-m radius plots within say a small park, the number of plant species counted initially grows quite quickly, and then the majority of subsequent plots yield fewer new plant species. This type of curve is commonly referred to as the species richness area curve, or the species accumulation curve.

The relatively steep portion of the curve indicates that many species are being discovered in each subsequent unit of time or area searched, whereas the relatively flat portion of the curve indicates few new species are being added for the same unit of time or area searched. Essentially, the curve represents the law of diminishing returns. It is akin to counting things in a finite system  (e.g., a park, a city, a country) with an underlying assumption that not everything can or will be counted. Even at the global scale, with the most devoted of birdwatchers who ardently strive for huge lists over many years or decades, nobody (at least on record) has seen all of the world's bird species, and those birdwatchers with the highest lists currently have very low rates of return for their continued efforts. And, even if someone did see all of the "known" species, the theory is that as yet undiscovered species (or subspecies that are awaiting splits) are still out there.

So back to Noah and his Really Big Year. Will he hit 5,000 species? Well, judging by the graph below it would be a no-brainer. In fact, based on the first 65 days (through to March 6) his rate of return has barely flinched. Currently, if he maintains the same pace, he will hit his goal of 5,000 species on July 24. Now at first that doesn't seem so bad, and even if the rate of return does begin to diminish he's still got a solid five months to "fill in the gaps"; or so the optimist would say. The reality though is that while the goal remains the same, the date at which that goal will be attained will slowly move. And in fact, it already is moving. Using only the first 46 days of Noah's count (up to February 15), the predicted goal date for hitting 5,000 species was July 19.

As Noah progresses I'll occasionally update the figure below...when will we see the steep part of the curve begin to level out? Will it level out? There are after all more than 10,000 bird species in the world so it is conceivable that if well-planned, his Big Year count could remain in the relatively steep section of the curve. But reader beware...not all 10,000 species are common...some are notoriously rare or difficult to find, or live in very small areas or habitats of the world that will not be visited by Noah (just look at his Big Year plan).

It will be very interesting to see what the curve will look like when Noah jumps continents...a sudden influx of new species and then a quick leveling? Time will ultimately tell. Let's just hope the goal post doesn't move past December 31. Could he get more than 5,000 species? 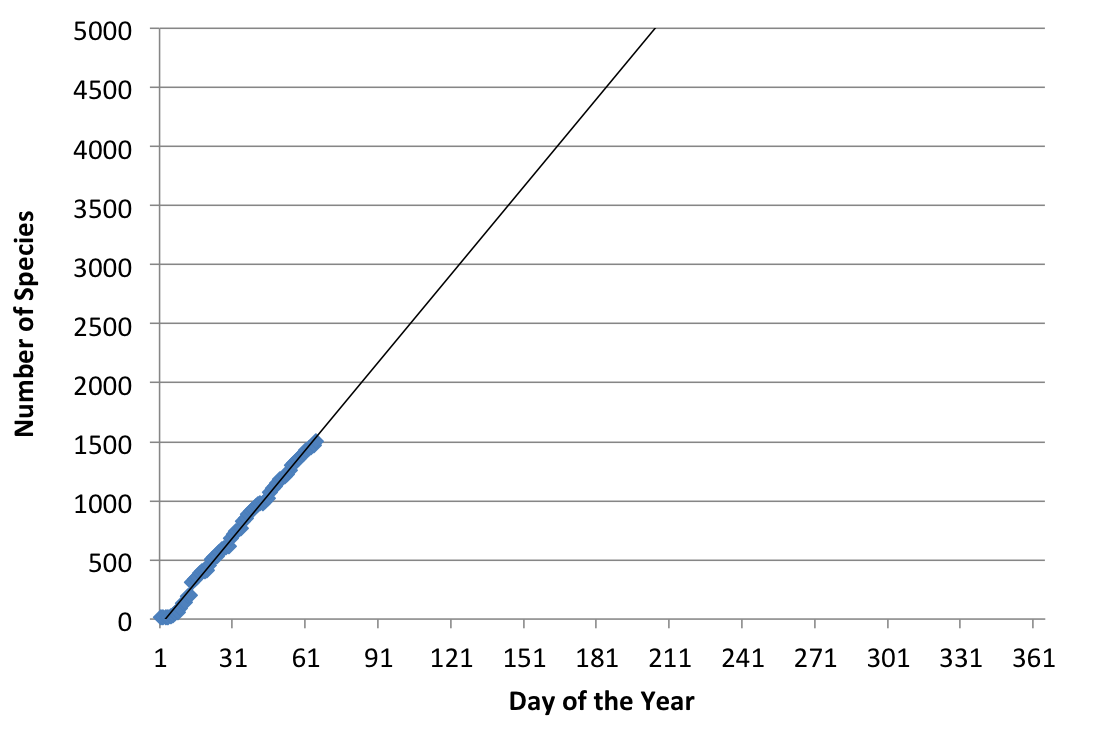 Posted by Michael Preston at 9:01 PM