This quickie visit to southern California included the San Diego area, and a couple of days in Joshua Tree National Park (JTNP). It was an excellent escape for myself, Joanna and Amelia where we could do a little bit of everything: go birding, walk on the beaches, go to Sea World, and visit the San Diego Safari Zoo Park. The first two days of our trip were spent in JTNP, where for the most part, birding was relatively quiet, despite being the peak of spring migration. JTNP is essentially a desert, with little diversity in the plant community and hence not a major attractant to migratory birds. However, just outside JTNP, at Morongo Park, birding was stellar in this lush riparian woodland of oaks, cottonwood and mesquite. Birding highlight's included Ladder-backed Woodpecker, Lazuli Bunting, Hooded Oriole, Phainopepla, Ash-throated Flycatcher, Yellow-breasted Chat, Plumbeous Vireo, Brown-crested Flycatcher, and Bell's Vireo (lifer). In JTNP, good bird sightings included Scott's Oriole, Verdin, Black-throated Sparrow, Prairie Falcon, and Cactus Wren. A new mammal for me, the White-tailed Antelope Squirrel, was also a highlight for JTNP. 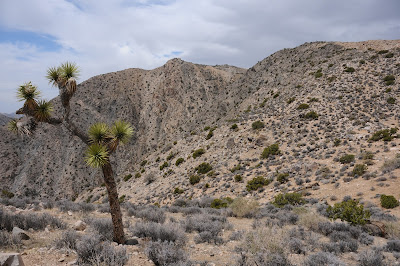 On our third day we travelled from the hot, dry windy desert of JTNP south to the Salton Sea, then west through Anza-Borrego Desert Park. Near the Salton Sea we saw such birds as Great Egret, Stilt Sandpiper, White-winged Dove, Northern Mockingbird and Red-shouldered Hawk. Further west, as the mountains drew nearer, big, black billowing clouds loomed on the horizon. The desert soon transitioned from dry scrub to shrubland, to juniper woodlands and eventually to mature coniferous forest punctuated by lush riparian areas. By the time we arrived in the quaint and quirky village of Julian, it was pouring with rain and thick with fog. A small reprise, was that nearly every cafe boasted about having the best homemade pies...at the cafe we went to, I have to say it was pretty good, and Amelia apparently agreed judging by the speed at which her spoon moved from dish to mouth. From Julian to San Diego the sky slowly cleared again as we descended to sea-level. Along the way there were dozens of Western Bluebird's and Acorn Woodpecker's, but as we gradually approached the concrete jungle of San Diego, Band-tailed Pigeon's were replaced by Mourning Dove's, which were then replaced by Rock Dove's.

On May 7 we spent the day near the US/Mexico border, in the vicinity of Dairy Mart Road and nearby wetlands. The goal was to see Least Bittern, but once again this elusive species evaded my binoculars. Nevertheless, I did still manage to see some good birds, including excellent views of Bell's Vireo, Black-crowned Night-Heron, Wrentit, Green Heron and Red-shouldered Hawk. At the Tijuana Estuary, where I failed miserably in the past to find any good birds, I finally secured my first-ever look at Clapper Rail (previously a heard-only bird). It was an excellent view, as the bird was seen bursting out of the thick estuarine vegetation and then running for several meters along the muddy shore before slowing to a walk and gradually disappearing again. A lone Yellow-crowned Night-Heron was also a good spotting. 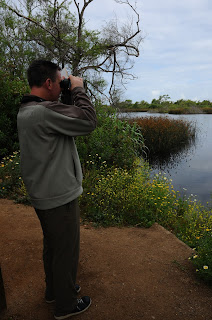 On May 9 we headed to Mount Laguna, about an hour northeast of San Diego and nearly halfway to Julian, where were just a few day previous. At Mount Laguna, where we hiked around the Indian Trail and the Laguna campground, we found such highlights as Pygmy Nuthatch, Hermit Warbler (lifer - finally!), California Thrasher and Lark Sparrow. Back at our beachfront hotel we saw Black Phoebe fly-catching adjacent to the bustling boardwalk, and a Peregrine Falcon perched on the hotel.

May 10 was the last full day of our mini-vacation. We spent the entire day at the San Diego Safari Zoo Park, and while the exhibits were very good (and completely re-vamped since I was last there in 2003), there were numerous native wild birds to be seen. These included several breeding colonies of Cattle Egret, Snowy Egret, and White-faced Ibis, as well as several pairs of nesting Black-crowned Night-Heron with very large nestlings. Upon return to the hotel, the Peregrine Falcon was back on its roost perch.

Another successful trip...with about 120 species. Not bad for a non-dedicated birding trip!
Posted by Michael Preston at 8:51 PM