This post is by no means breaking news, but Noah Strycker broke the Global Big Year world birding record on September 16. His record-breaking bird, bird number 4342, was Sri Lanka Frogmouth.

To me, the writing was on the wall very early in the year (see earlier posts); the record would easily be beaten given the pace Noah had set for himself. Perhaps, however, the most impressive element of breaking the record is the actual date in which he broke it...leaving a full 106 days in 2015 to widen the gap, making it increasingly difficult for a potential record challenger to be successful.

Noah set a personal goal for himself to see 5,000 species in 2015. Since I've been tracking his progress, the data has consistently indicated that he is very likely to break 6,000 species. The updated stats below still support this prediction, even though there has been a gradual (but hardly significant) decline in return over time.

Up to the end of September, the updated predicted date of when Noah will achieve seeing 5,000 species is Oct 19. On average, this depends on Noah seeing 22.8 new species per day, every day. On October 1 he added none; on October 2 he added 14. Birding is not without its surprises and challenges. 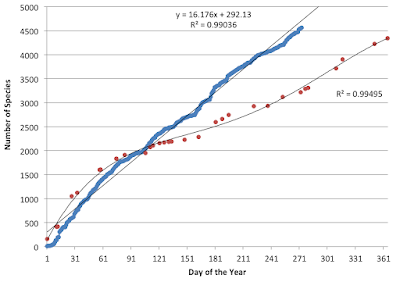 I love this next graph...the sheer magnitude of the difference between previous global record holders and Noah's tally. On September 29th, Noah was 1,330 species ahead of previous-record holders at that same time of year. That is an impressive gap! 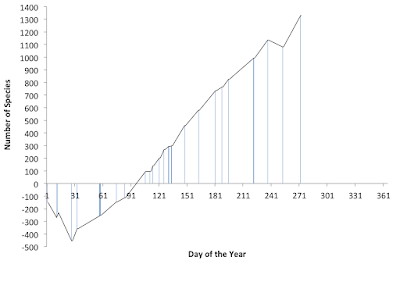 In this figure, each dot represents the number of new species Noah has added every day to his year total. There sure is a lot of variation in these data, and if this data says anything about predicting the future, it is that it will be difficult. The amount of variation in the daily tallies is very poorly explained by time, as R-square is only 3%. This is not terribly surprising, as the biggest factor contributing to the variation in number of new species is likely related to geography and the amount of time spent in an area (see my first post on this topic). 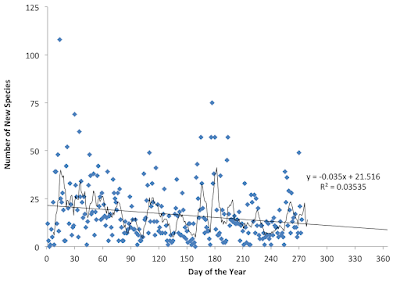 With all of this new data, the updated predicted year-end total for Noah is now 6,196 species.

Posted by Michael Preston at 9:33 PM