Having lived in British Columbia for more than 12 years, and having done pelagic trips in California and Washington, it's almost hard to believe it has taken this long to do a pelagic bird trip in my home province. Truth of the matter, however, is that pelagic trips, or at least the availability of them, are not a regular occurrence in British Columbia - at least until now!

WildResearch (http://www.wildresearch.ca/), a federated club under BC Nature, believes in identifying and developing solutions to conservation issues through a multidisciplinary approach using research, monitoring, training. One such avenue for achiving this has been the creation and deployment of pelagic trips in BC waters. Their first trip, based out of Ucluelet, BC, was in September 2011. Their second trip, and the one I went on, was on 29 April 2012 and also based out of Ucluelet. In total, 86 people went on this trip, including four Stantec wildlife biologists (pictured below, left to right: Marcel Gahbauer, Kent Russell, myself, and Christina Ball). 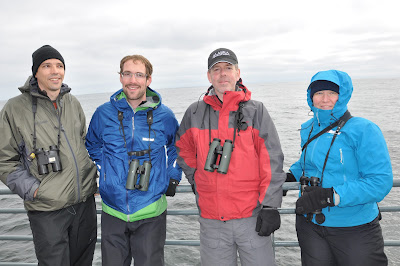 The boat, the M.V. Frances Barkley, departed the government dock in at 7:00am and headed immediately west into relatively rough seas. Upon departure we saw hundreds of Western Sandpipers and a few Dunlin, as well as several Mew Gull's and Common Merganser. Our first true seabird, located about 10 kilometers off the coast, was Sooty Shearwater, followed shortly by Sabine's Gull and Black-footed Albatross. Further out to sea we spotted Ancient Murrelet, Rhinocerous Auket, Red-necked Phalarope, Marbled Murrelet, Common Murre and Bonaparte's Gull.

The highlight for just about everyone on the trip was British Columbia's 22nd record of Manx Shearwater. This bird would have been a lifer for me had I not seen one just a week ago in England! Other highlights included Red Phalarope and Tufted Puffin, as well as a few Pink-footed Shearwaters. Quite surprisingly we did not get any terns, jaegers or fulmars, but what we lacked here was certainly made up for by an impressive array of mammals, including Orca (4), Gray Whale (3), Humpback Whale (70+) and Sea Otter (1). Back at the dock we were treated to a small group of Northern Sea Lions awaiting fish scraps from the local fishing cleaning stations.

For my first pelagic trip in British Columbia I'd have to say it went very well. Over the years I hope WildResearch is able to sustain a large-enough number of participants to ensure these trips are run at least annually, assuming bi-annual trips may not be sustainable. I certainly would attend a fall trip, and think that with enough time, this could become the first long-term pelagic census of seabirds on British Columbia's south coast.

Special thanks to all of the WildResearch organizers, and especially to Christine Rock for providing me with a copy of the "Stantec group of four" photo, and to Paul Levesque for his stunning image of a Black-footed Albatross. Thanks also to the "official" on-board spotters. Lastly, it was wonderful to have met so many new and old acquaintances, and Marcel, I do hope you get your Surfbird one day! 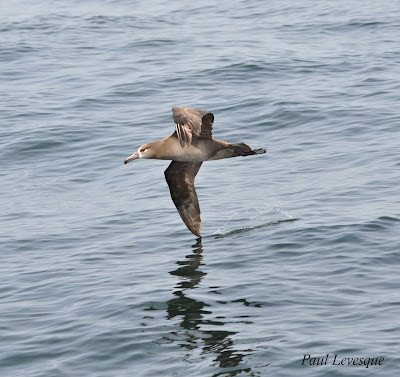 Posted by Michael Preston at 10:49 AM